The companies that this month helped to jail trade union leader Nurbek Kushakbayev are linked, via Kazmunaigaz, Kazakhstan’s state-controlled oil and gas firm, to Chinese and international capital.

While workers in the western Kazakhstan oilfield suffer repeated waves of state repression – from the notorious police massacre of strikers at Zhanaozen in December 2011 to this year’s fines, arrests and bans on trade union organisation – investment funds based in New York and London profit directly from their labour.

Kushakbayev worked at the Oil Construction Company (OCC), an oilfield service company, where workers staged a two-week hunger strike in December last year, in protest at the winding-up of Kazakhstan’s independent union federation. It was OCC’s management that complained to the court of his involvement.

Workers at Techno Trading Ltd also went on strike. Kushakbayev was convicted on 7 April of encouraging them to take action, and ordered to pay 25.2 million tenge (about $80,000) to the company in compensation (according to a court press release).

Oil Construction Company is wholly owned by AktauNefteServis, which in turn is wholly owned by Kazmunaigaz. (See its annual report.) AktauNefteServis works mainly for Mangistaumunaigas, an oil production company operation in the Mangistau region of western Kazakhstan. Mangistaumunaigas is a joint venture between Kazmunaigaz and the Chinese oil company CNPC, valued at $2.6 billion when they bought it in 2009.

Techno Trading is another oilfield service company that works almost entirely for Kazmunaigaz subsidiaries in the Mangistau oil fields.

Kazmunaigaz, like many national oil companies in producing countries, is a huge holding company with subsidiaries that produce, transport and refine oil and gas, as well as oilfield service companies and other smaller units. Kazmunaigaz is 100% owned by the government, through the Samruk-Kazyna investment fund (90%) and the National Bank (10%).

Kazmunaigaz is solidly linked to Chinese oil companies through 50-50 joint ventures such as Mangistaumunaigas, and to the city of London and international investors through its Kazmunaigaz Exploration and Production (KMG EP). KMG EP is owned 57.9% by Kazmunaigaz, 8.1% by itself through Treasury shares, and 34% by investors on the London and Kazakhstan stock exchanges. Among the largest of these (according to Reuters) are the China Investment Corporation, the Chinese sovereign wealth fund (in which the state keeps its foreign exchange), and BlackRock 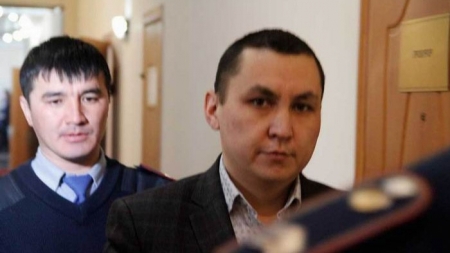 KMG EP’s minority investors last year clashed with Kazmunaigaz management, who wanted to strengthen their own control over KMG EP – and in August last year defeated their parent company.

KMG EP is not directly linked to the small service companies at the centre of this year’s anti-union crackdown. But the climate of fear that the Kazakh authorities are trying to create in the western Kazakhstan oil field is part of the context in which the company makes its money.

■ One of KMG EP’s two production subsidiaries, Ozenmunaigaz, was at the centre of the 2011 strike movement that ended with the police shooting of strikers in December that year. Several thousand of its employees formed the largest contingent in that strike, the biggest ever in the Kazakh oilfield.

■ Ozenmunaigaz and Mangistaumunaigas are neighbours on the oil field. (KMG EP managers liked Mangistaumunaigas so much that they cut a deal with Kazmunaigaz to buy it, which fell through because state regulators would not approve it. (See KMG EP’s annual report 2012, p. 33).)

■ KMG EP, with its links to the city of London, help to burnish Kazmunaigaz’s reputation on western money markets, helping it to keep the door open to western and Chinese money at the same time. A recent investor presentation boasted that since the initial public offering (IPO) of its shares in 2006, KMG EP had returned $4.6 billion to investors.

On 12 April KMG EP held its regular Board of Directors’ meeting and agreed to distribute $63 million, or about 15% of the net profit for 2016, to shareholders.

Who knows whether the gentlemen at the meeting discussed the cruel punishment that was dished out days before to Nushek Kushakbayev, for his part in furthering workplace organisation, and defending workplace rights, on the oilfield where they make their money? Certainly they didn’t mention it in the announcement they made of their decisions via the London stock exchange. GL, 19 April 2017.

This entry was posted on Wednesday, April 19th, 2017 at 6:53 am and is filed under Energy, Social and labour movements. You can follow any responses to this entry through the RSS 2.0 feed. You can leave a response, or trackback from your own site.