Leila al-Shami, co-author of Burning Country, a writer who has worked with human rights movements in Syria and elsewhere in the Middle East, gave this interview to Ilya Matveev and Gabriel Levy on 29 November (before the fall of Aleppo to the government forces). It also appears on the LeftEast site, and will soon be published in Russian on OpenLeft, as part of a transnational discussion between activists.

Gabriel Levy (G): What is the situation right now?

Leila al-Shami (L): The situation in Aleppo is absolutely critical. And the voices which can be heard from there are just showing how much panic and fear there is in rebel-held East Aleppo. People have been trapped in

A picture of Bashar al-Assad riddled with holes on the facade of the police academy in Aleppo, after it was captured by Free Syrian Army fighters, March 4, 2013. Photo Reuters/Mahmoud Hassano)

East Aleppo since late August. There are tens of thousands of people under siege and there’s no way for them to get supplies in, there’s no way for them to get out. So they are effectively in an open-air prison. They are being subjected to extremely heavy bombardments and airstrikes. Gas has been fired at people. Hospitals are being deliberately and systematically targeted. Fuels are running out, there is no water. Civil defence structures have been targeted. People are now using carts to try to END_OF_DOCUMENT_TOKEN_TO_BE_REPLACED

Kazakhstan’s main independent trade union confederation is fighting for its life, as a court reviews a “justice” ministry bid to have it shut down.

The legal onslaught on union organisation comes after a four-year drive against opposition political parties and independent media. Nevertheless, 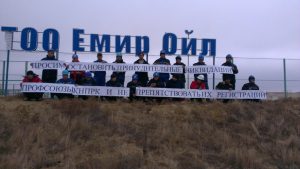 Workers at Emir Oil, Kazakhstan, display a banner protesting at the legal attack on independent trade unions. Photo by KNPRK.

the workers’ movement is not beaten: strikes, even where organised outside the law, are forcing employers and state authorities alike to back off.

The Justice Ministry’s case against the Confederation of Independent Trade Unions of Kazakhstan (KNPRK) opened in Shymkent, in the south of the country, on 5 December.

The ministry is also urging the liquidation of industrial affiliate organisations representing mine workers, medical staff and domestic workers. The KNPRK (formerly the Confederation of Free Trade Unions of END_OF_DOCUMENT_TOKEN_TO_BE_REPLACED

Aleppo is being drowned in blood. The Assad regime’s armed forces and Iranian-supported militias are doing the killing, supported by Russian air power and armed with Russian weapons. The “great powers” are standing by and letting them get on with it.

This is a disastrous setback for the popular uprising that started in Syria in 2011, although even now that movement of social liberation has not been completely defeated.

These are some facebook posts from Aleppo and elsewhere, shared by Syrian friends.

From Raed Fares on 12 December.

Doomsday in Aleppo
The people of Aleppo have gone to sleep
The people of Aleppo have died
Now, finally, the world will be blessed with a deep, uninterrupted sleep
As power in the US is transferred from a failure to a racist, Putin and Assad are murdering 150,000 civilians in Aleppo
The entire world can finally have some peace and quiet as the screams of Aleppo’s residents will be forever silenced
But their corpses, the corpses of Aleppo, will turn your dreams into nightmares

Afghanistan: pictures that are worth thousands of words

The photos in Guy Smallman’s book The Displaced speak for themselves, writes NADINE BALLANTYNE

A Pakistan government programme to force refugees out of Pakistan and back to Afghanistan is causing extreme hardship, as the majority have no home to return to, no family and no way to make a living. As a result the situation for internally displaced people (IDPs) in Afghanistan is deteriorating rapidly.

Things were bad enough prior to Pakistan’s action. A recent report by Amnesty International stated that the number of IDPs in Afghanistan has doubled to 1.2 million in the past three years, as increasing violence and poverty continue to push people from their homes.  According to Amnesty, “those internally displaced live in horrific conditions, on the brink of survival, with little access to food, education or health care”.

The photographer and activist, Guy Smallman, started going to Afghanistan regularly in 2008, when he first visited the Char-e-Qamba camp for IDPs in Kabul. He documents some of the children living in the camp in a beautiful and moving new book of photographs, The Displaced.

Apart from a short introduction, and captions at the end, Guy doesn’t put

Boys at the Chamn-e-Babrak camp playing football in the car park of a semi-completed but long abandoned housing development (2014). By Guy Smallman.

words to the images. No description or opinion is needed, as they are powerful and full of the realities of the children’s lives without any need of END_OF_DOCUMENT_TOKEN_TO_BE_REPLACED