The Lucas plan and the politics of technology

This guest post by DAVID KING of Breaking the Frame looks back at how workers at Lucas Aerospace championed socially useful technology. It is a shortened version of a two-part article on the Breaking the Frame website, and feeds into a debate we’re holding this Saturday at the Anarchist Bookfair.

This year is the fortieth anniversary of The Lucas Plan, the pioneering effort by workers at the Lucas

Aerospace arms company to propose alternative socially useful applications of the company’s technology and workers’ skills, whilst retaining jobs. It was an inspiring model of industrial democracy and has played an important role in showing that traditional trade union concerns about jobs losses arising from closures in harmful industries such as arms, nuclear power, etc., can be met. The Plan was hugely influential in the 1980s peace movement, during the crisis at the end of the Cold War.

But although younger generations of leftists, environmentalists and peace activists may never have heard of it, the ideas of the Lucas Aerospace workers are crucially relevant for the challenges we face today, including climate change, militarism and automation/artificial intelligence. A conference in Birmingham in November will both celebrate the achievements of the Lucas workers and, we hope, reinvigorate movements for socially just solutions to those crises.

Crisis of capital, Science and technology, Social and labour movements |

Wear the white poppy, for all victims of all wars

In Syria, the massacre of civilians in Aleppo by the regime, with military support from Russia, continues. In Iraq, a million or more civilians in Mosul are being caught between the national army, supported by the US and the UK, and so-called Islamic State.

On Saturday, the Syria Solidarity Campaign in the UK organised a march in solidarity with the civilian population of Aleppo. “Assad, Russia and Iran burn Syria. The ‘democratic world’ buries the 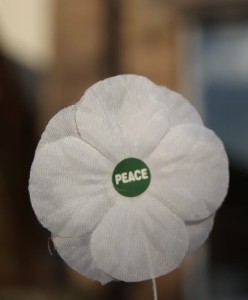 extinguisher”, they said. As far as I can see, the so-called “left” was largely absent.

The Syria Solidarity Campaign called on the British government to “protect civilians” by enforcing a “no bomb zone”. I find it difficult to support such calls, because I fear what the warmongers END_OF_DOCUMENT_TOKEN_TO_BE_REPLACED

Technology and the future of work: a debate

A debate on “technology and the future of work” will be held this coming Saturday, 29 October, at 4.0 pm, at the Anarchist Bookfair in North London. The discussion will be started off by Nick Srnicek (author, with Alex Williams, of Inventing the Future: Postcapitalism and a World Without Work (2015)) and Gabriel Levy (who writes this blog).

What role does technology play in our ideas about a better world? How could it affect the nature of work in the coming decades? With mass automation looming, is anti-work politics the best solution? The discussion will examine these and other questions around technology and communism, attempting to think through what a future society could look like.

Here are a couple of articles I wrote in response to Inventing the Future, mentioning some of the points that we will talk about on Saturday: ■ Technological utopias: the nuts and bolts. ■ Networked socialism: back to the future.

And here are some more articles discussing Inventing the Future, on the Communism in Situ and Mute sites.

The Bookfair is being held at Park View School, West Green Road, London, N15 3QR. There are plenty of other important discussions on Syria, Brexit, communist and anarchist ideas, and so on. Hope to see you there!

Robots at the Kia car assembly plant in Slovakia

Living standards plummet: what war in Ukraine has “achieved” #2

Ukrainian working people’s wages last year crashed to around 30% of their peak in 2013, in dollar terms, a report by the International Monetary Fund has said.

In January 2014, average real wages were about 75% of their level in January 2013. They fell steeply in early 2014, as war loomed – after the fall of president Viktor Yanukovich in February and the annexation

Photo: anarchist contingent on a union protest against the new labour code in November 2015. From the Ukraine activist perspective facebook page

This year “real wages have started to recover, albeit from low levels”, the IMF’s Country Report (no. 16/319, downloadable here) said last month.

The economy as a whole has also started to bounce back from the bottom, according to the Fund’s criteria. Last year it measured a 9.9% fall in GDP and a decline in industrial output of nearly 16%. This year the IMF is expecting economic growth of 1% in Ukraine.

The production of steel, coal and other raw materials also sank during 2014 and 2015, and has made timid steps towards recovery this year.

The World Bank, in a separate report, said that poverty “increased significantly in 2015 due to declining real wages”.

“Inflation peaked at 43.3% at the end of 2015”, due to “considerable depreciation” of the hryvnia, Ukraine’s currency, said the Bank’s Ukraine Economic Update published on 22 September (downloadable here).

“Households were also impacted by higher energy prices in 2015, although the new means-tested END_OF_DOCUMENT_TOKEN_TO_BE_REPLACED

Slave labour in Lugansk: what war in Ukraine has “achieved”

The prisoners are caught in a legal no man’s land. Most of them were
sentenced and jailed by the Ukrainian court system, which the

“people’s republic” – established in May 2014 by armed separatists supported by Russia – does not recognise.

The prisoners are forced to work by violence, and the profits from what they produce shared by the “republic”s authorities, the report, published last week by the Eastern Human Rights Group (EHRG), says. (Here in Russian.) The group emerged from trade union END_OF_DOCUMENT_TOKEN_TO_BE_REPLACED