Let’s face it. Melting ice has passed point of no return

Leaders of many of the world’s states gather in Paris next month for climate talks, having promised in advance that any agreement will fall well short of the 2 degrees target for avoiding dangerous global warming.

An army of politicians, PR people and diplomats are working to create the impression that, nevertheless, something positive is being done. This balloon of 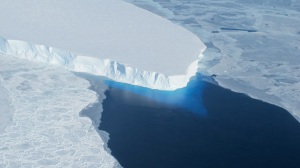 hype needs to be popped. The precondition for serious action is honesty about the scale, and difficulty, of the problem, and acknowledgement of how far away we are from a solution.

Rising sea levels is a key part of the problem, and recent research on it – that I attempt to summarise and discuss in this article – helps explain the scale of the problem.  The bottom line is this: while governments’ promises lag further and further behind targets for climate action set out by the END_OF_DOCUMENT_TOKEN_TO_BE_REPLACED

How neo-liberalism used the “limits to growth”

In this interview, SARA HOLIDAY NELSON, a PhD researcher at the University of Minnesota-Twin Cities, USA, who is studying the politics of environmentalism in the 1970s, discusses first-world-centred and Malthusian approaches and some responses to them

Gabriel Levy. Let’s start with your critique of the “Limits to Growth” arguments.[1] And first – addressing ourselves e.g. to people demonstrating about the lack of action on climate change at the Paris talks – a very basic question: you are not saying, are you, that there are no natural limits, or that they are not important?

Sara Holiday Nelson. Yes, that’s correct. First, it’s not that material limits don’t exist, or are not significant, but what they mean at any given moment is a complicated socially- and politically-determined process. The question of what those limits are, and how they might be shifted – not transcended by some techno futurism, but how a different mode of social organisation or economic production might have different limits – suggests that speaking of ecological limits only makes sense if these are considered relative to any particular kind of social organisation. For instance, the idea of “peak oil” – which itself is a dubious proposition, given the recent transformation of shale and other porous

rocks into “oil” resources through new fracking and drilling technologies) – is only a “limit” to an economic system that depends on cheaply-available fossil fuels. I am therefore against an absolute notion of limits, such as for instance a neo-Malthusian view that equates the scarcity of certain resources with a fundamental limit to human life on Earth. This approach still allows us, I think, to talk about a notion of relative limits at any given historical moment.

Second, I think that the way that the limits discourse has been mobilised in the past has not been politically productive. My view is consistent, I think, with the END_OF_DOCUMENT_TOKEN_TO_BE_REPLACED

Russian political performance artist Pyotr Pavlensky, who set fire to the doors of the Federal Security Service (FSB) headquarters this week, has asked a judge to treat him the same way as political prisoners from Crimea.

On Monday Pavlensky poured petrol on the doors of the notorious building on Lubyanka square – used since the 1940s as the offices and detention centre of the KGB, the Stalinist security police – and set light to them. Supporters

filmed the action. Pavlensky was arrested and charged with “vandalism motivated by ideological hatred” – to which he responded: “It would be strange to have any other attitude to the Lubyanka.”

In the Taganka district court on Wednesday, Pavlensky said that “the so-called ‘Crimean terrorists’” were charged with terrorism offences for setting fire to doors, in cases fabricated by the FSB. “I demand that I be suspected of terrorism. I consider this to be the logic of your system. Until this demand is met, I refuse to participate in all your juridical rituals.” He then declined to answer further questions.

The Crimean prisoners to which Pavlensky referred are anti-fascist activist Aleksandr Kolchenko and film director Oleg Sentsov, political prisoners jailed for their part in protests against the Russian annexation of Crimea in March 2014. Kolchenko and Sentsov were in August sentenced to ten and twenty years respectively by a court in Rostov-on-Don, southern Russia, on fabricated terrorism charges. A third frame-up victim, Gennady Afanasiev, gave END_OF_DOCUMENT_TOKEN_TO_BE_REPLACED

Eastern Ukraine: bosses tighten the screw, but eventually the screw’s thread will break

In this interview, PAVEL LISYANSKY of the Eastern Human Rights Group gives an update on efforts to defend workplace rights in eastern Ukraine, as military conflict continues between the government and Russian-backed separatists. Pavel is a trade union activist and humanitarian rights campaigner in towns near the front line with the separatist-controlled territory, which runs through the industrial areas of Donetsk and Lugansk. The interview was published on 2 November in Russian on Nihilist.li, an anarchist web site based in Kyiv.

Question. [Please update us] on two labour disputes: the hospital in Svetlodarsk that landed in a bureaucratic “black hole”, and the shopping centre in Severodonetsk that is trying to force workers to leave their jobs without severance pay. Is there any news about these two episodes? Are you aware of other instances of labour rights violations in recent months?

Pavel Lisyansky. Regarding the hospital at Svetlodarsk. [After a major battle at Debaltsevo in February, the hospital, on the Ukrainian side of the front line, was cut off from the local government administration, which was

Pavel Lisyansky with protesting workers at the Amstor supermarket in Severodonetsk. Photo from the Nihilist web site.

on the other side. Despite the urgency of the life-saving work of more than 100 staff, they have not been paid for ten months because local authorities failed to resolve the bureaucratic “black hole” into which the payments had fallen.] The government did not hear the voices of the workers. The salaries have not been paid and hospital funding has not been restored. The problems are the same: winter, cold. But the medical staff do not give up. At a meeting of the trade union committee the members decided to hold protests and organise a walk from the [military – HČ] front line to the regional state administration in Kramatorsk. […]

Regarding Amstor [supermarket – HČ]: the employer has adopted harsher tactics and forbade the use of heating in empty premises. [Managers want to dismiss workers, who are refusing to leave until they receive months’ worth of back pay they are owed, and severance to which they are legally entitled.] People have taken sick leave en masse.  […] I also began to receive phone threats. The situation in this instance is more difficult, because in order to fight against such an unscrupulous employer one must set in motion all sorts of workers’ rights END_OF_DOCUMENT_TOKEN_TO_BE_REPLACED