Let’s do what’s safe and healthy

Let’s do what’s safe and healthy. Which might not be the same as doing what the government says.

Since the prime minister announced a lockdown in the UK on Monday, you might be tempted to think that the government has got a grip of the coronavirus crisis. I don’t think so.

The UK’s testing regime is a shambles. After weeks of delay, and thanks to massive public pressure, the government is promising – without giving a timeline – tests for front-line health service workers.

Those workers are having to take time off sick, because they can’t get tested. They are

Walking in the park is good for your health

desperately short of personal protective equipment. And worried about the deluge of sufferers now arriving in hospitals.

The situation with the supply of ventilators for those who fall seriously ill is alarming. The government refused to join a European buying scheme – and then pathetically tried to cover its tracks by claiming officials did not receive an email. Brussels nailed that lie quickly.

Manufacturers of ventilators who offered the government help have been ignored. Instead, a contract was offered to Tory party supporter James Dyson, whose company has no relevant experience.

Senior ministers feel comfortable covering their tracks with deceit and diversion. Michael Gove, challenged by journalists yesterday to explain the disastrous failure on testing, tried to blame China. The editor of the Lancet, Richard Horton, has given chapter and verse on that one.

The government was forced to change its initial laissez faire policy, which appeared to END_OF_DOCUMENT_TOKEN_TO_BE_REPLACED

The money mountains are tumbling down

The coronavirus outbreak is triggering an economic recession far deeper than the one that followed the 2008 banking crash. Chunks of the money mountains are breaking off and sliding into an abyss.

While we struggle to get used to the lockdown, worrying about friends, family and vulnerable people in our communities, the flesh-eating hyenas who control the world economy are struggling to protect their fortunes.

Here is a quick summary of the way it looks today in the Financial Times. (I’ve included links to the articles, although many are behind paywalls – sorry for that!)

Forecasts of economic recession. Macquarie bank, in a note to investors, said:

The global economy is in deep recession. […] Quantifying the magnitude of the near-term hit with any certainty is not possible [but] the partial data to February show that the hit to China is without precedent.

Macquarie’s models suggest that the Chinese economy probably fell by 20% (seasonally adjusted annual rate or SAAR) in the first quarter of the year, and that the rest of the 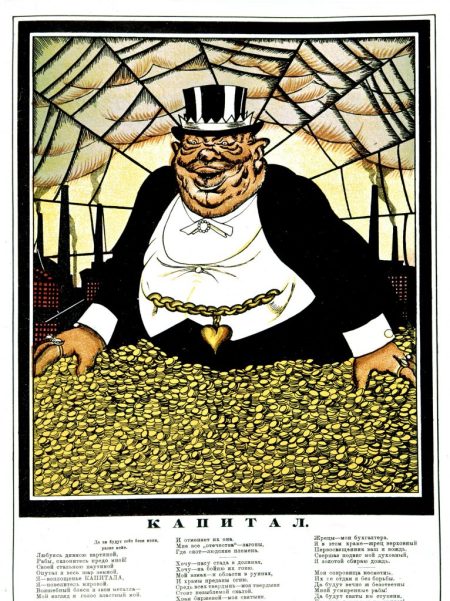 “Capital”. A poster published in the Soviet Union in 1923

world economy will sink by 15% SAAR in the second quarter – that is, “the worst quarterly contraction in the modern era”, compared to “the weakest quarter during the Great Recession” of about minus 9% SAAR.

The shock in the second quarter is likely to be broadly spread across the major advanced economies, with differences likely drive by the respective stimulus packages and government approaches to containment.

Another note, from Morgan Stanley, focuses on how its clients can profit from the recovery, once it starts:

While it’s not possible to call an absolute bottom with precision, we think it’s close on many metrics. […] Aggressive monetary and fiscal policy measures, degrossing to date, and optimism about the impact of social distancing have us leaning more positive. Even in the worst possible outcome – a depression – there is historical precedent (1930) to think we can rally sharply from the recent downturn.

In the US, for the second quarter of the year, Morgan Stanley forecasts a 30% drop in Gross Domestic Product (GDP); Goldman Sachs reckons it will be 24%.

On 21 March (Saturday) Azat Miftakhov, a graduate maths student at Moscow State University, will celebrate his birthday in prison.

“The thirst for knowledge is stronger than repression”. A solitary picket supporting Azat Miftakhov at Moscow State University

Azat is a political prisoner. Wherever you are, please participate in the on-line event to support him: write “Free Azat” on a placard, take a photo, and put it on line with the #freeAzat hashtag. There’s more information about the event here on facebook.

Azat was detained on 1 February 2019, held at first on suspicion of manufacturing explosives, and tortured by the police and the Federal Security Service. In the first few days of Azat’s detention, the security forces concealed his location from his lawyer.

Azat had just started his mathematical career: his first paper, “On weak convergence of END_OF_DOCUMENT_TOKEN_TO_BE_REPLACED

Coronavirus: Doctors advise. The government does not listen

They have called for more transparency, as well as speedier implementation of “social distancing” and testing.

Until the end of last week, officials were suggesting that the government’s strategy aimed to allow the virus to spread through healthy sections of the population in order to build up “herd

immunity”. This was roundly denounced by epidemiologists – and on Sunday that produced some backpedalling by Matthew Hancock, the health secretary.

But still, today, the logic is opaque. Scientists’ requests to see the government’s data have fallen on deaf ears. And the UK’s “social distancing” measures are still far behind the Scottish and Irish governments, sports governing bodies and most of Europe.

Here I will try to summarise the way the rift between doctors and the government has deepened since I posted about it on Friday. I have no medical training; I am just trying to clarify what is going on.

Along with many thousands of others, I have joined a local Coronavirus mutual aid group – and to take matters into our own hands effectively, we need accurate information. If you think I have got something wrong, please say so in the comments.

■ The government is not sharing information with the country’s epidemiologists and other specialists.

This was the main point made in a letter to the Times on Saturday by six senior epidemiologists and public health specialists, and supported by 630 others and counting. The UK’s response to END_OF_DOCUMENT_TOKEN_TO_BE_REPLACED

Coronavirus: scientists versus the government

With the coronavirus now spreading more rapidly in the UK, a huge gulf has opened up between epidemiologists and public health researchers on one side and the government on the other.

And in the absence of clear directions from government, others – from managers of universities and workplaces to families – are making their own decisions.

The fact that the former health secretary Jeremy Hunt has grabbed the headlines this morning, urging stronger measures, shows just how lost Boris Johnson’s government is.

But the most damaging criticism of the government I have seen is from medical and scientific experts polled by the Guardian yesterday for their reaction to Johnson’s announcement.

Their language was measured, even understated. They were extremely careful not to exaggerate.

(Senior climate scientists do the same: these highly privileged, clever people who have spent decades working their way to the top of their professions – and for whom dealing with politicians is part of the job – chose their words carefully.)

If we read their comments with all that in mind, they are devastating.

Professor Paul Hunter at the Norwich Medical School: “I was expecting there to be something a bit more rigorous. […] Just telling elderly people to not go on cruises isn’t enough to protect them. I would’ve hoped we’d be seeing more targeted advice for elderly and vulnerable citizens […]. I think they’ve been left out on a limb. [My emphasis, GL.]

Hunter’s most damning point was about the government’s lack of transparency: “I would like to see a bit more about why they’re not closing schools and banning large events. We do know, in END_OF_DOCUMENT_TOKEN_TO_BE_REPLACED 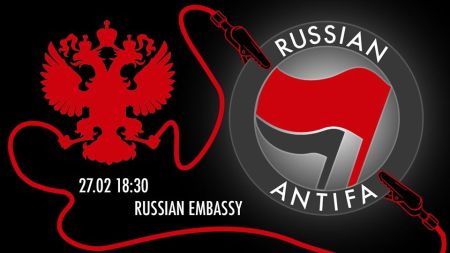 This month seven Russian anti-fascists were jailed with lengthy sentences ranging from six to eighteen years. They were framed and tortured by the Russian Federal Security Service (FSB) and accused of being members of a fictional terrorist organisation called “The Network”.

Two other anti-fascists accused of being part of the organisation dreamt up by the FSB, Viktor Filinkov and Yuly Boyarshinov, have a trial resuming this week – which makes it particularly important to show solidarity.

We are calling on anti-fascists from across London and the south east to protest outside the Russian Embassy on Thursday evening, 27 February, to express our solidarity with the imprisoned and tortured anti-fascists suffering from this repression.

This is part of the international week of action in solidarity with the prisoners.

■ More on the case on People & Nature here

In a guest post, NAGRAJ ADVE reports on an alliance that is working out new strategies and organisational forms

The climate justice movement in South Asia, and India in particular, is moving in new directions with the formation of the South Asian People’s Action on Climate Crisis (SAPACC). 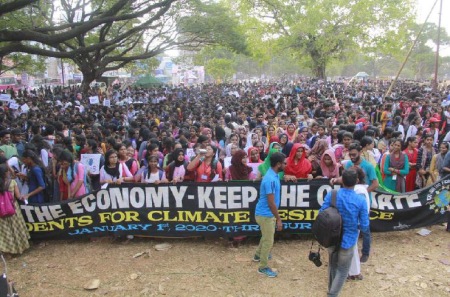 Students for Climate Resilience launching their campaign in Thrissur, Kerala

organisations, environmental groups, and a few progressive political parties – from Bangladesh, Nepal, Sri Lanka, and many parts of India had met over four days in Hyderabad in South India.

The meeting discussed key impacts of the climate crisis, critiqued the inadequacy of governments’ policies, presented ways forward, and demanded that the United Nations and their respective governments declare a planetary climate crisis.

Following that launch meeting, a number of SAPACC’s constituents have organised END_OF_DOCUMENT_TOKEN_TO_BE_REPLACED