Scotland: ‘this movement is learning fast, growing arms and legs’

CATHERINE MILLIGAN, a socialist and community activist on the Castlemilk housing scheme in Glasgow, reflects on the aftermath of the Scottish independence referendum.

So Scotland said no to independence with a historic turnout of 84%. The margin was 383,937: this was so close. The “Yes” campaign galvanised 1.6 million voters to challenge and undermine the Westminster staus quo –

Solidarity: on the weekend after the referendum, campaigners decided to collect food for Glasgow’s food banks, and put the word out on social media to bring donations to George Square

despite the onslaught by the establishment, which threw its full weight behind a “No” vote. Every single tabloid and broadsheet newspaper, bar one, supported a “No” vote; banks and businesses threatened to withdraw from our economy; most trade union leaders  advocated a “No” vote. Firms sent personal letters telling workers that if they voted “No” they could lose their jobs. Pensioners were told their pensions would be undermined. Despite all this 1.6 million people voted “Yes”, against the Westminster elite and its austerity.

In the aftermath, as you can imagine, even those of us who expected that “No” would win marginally were a tad deflated. It didn’t help that George Square [Glasgow’s main square] was taken over on Friday [19 September] by a hundred or so right-wing “No” campaigners, mobilised by Britain First, singing Rule Britannia and spouting hatefulness and division. It was a complete contrast to the previous evenings, when the square was full of hope and unity, with thousands of people united against Westminster rule and their savage economic policies against the working class. On Friday, some of the Rule Britannia mob were seen wearing END_OF_DOCUMENT_TOKEN_TO_BE_REPLACED

Scotland: “yes” was for social justice, not narrow patriotism

A guest post by HILARY HORROCKS, a socialist activist who lives in Edinburgh

The day after the Scottish independence referendum on 18 September – in which 45% voted “yes” to independence and 55% voted “no” – someone chalked on the pavement of Glasgow’s George Square: “Glasgow said Yes”.

Its past tense was a poignant comment on the despair felt in the immediate aftermath by the “yes” campaign, which had latterly turned this area of the city into a mini-Tahrir Square.

In many respects the 45% support for independence was remarkable, given that its backers were subjected to what the Sunday Herald called “the 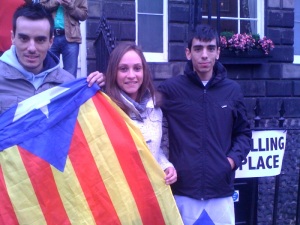 political equivalent of carpet bombing” in the last two weeks of the campaign, after a YouGov poll suggested for the first time that “yes” might carry the day. The “Better Together” campaign, complacent up till now, suddenly sent its big guns into Scotland, Labour leaders allying with Tories and LibDems to try to “save the Union”.

Prime Minister David Cameron flew in twice, but never met a single voter on the street: he was filmed for TV talking to carefully selected audiences. Even the reclusive ex-PM Gordon Brown was pressed into service to make impassioned pleas END_OF_DOCUMENT_TOKEN_TO_BE_REPLACED

In this guest post, CATHERINE MILLIGAN, a socialist and community activist who lives in the Castlemilk housing scheme in Glasgow, explains how she has changed her view of the referendum on Scottish independence

I am voting Yes to Scottish independence, and I haven’t come to that decision easily – because I call myself a socialist, and believe I am a citizen of the world, and felt it was ill advised to break up the working class movement

Standing room only at one of the meetings in Castlemilk, Glasgow, to discuss the referendum

in Britain. I also fear the rise of fascism, especially in England where Ukip have free range to expound their ideas via most established media outlets.

However the young people of Scotland have changed my point of view, in that they are very pro-Yes and their arguments for this are very sound in my eyes.

They are clearly saying that it is not about nationalism: it’s about having a voice that can be heard – which they do not have now. They state clearly that they hate the Tory and Lib Dem END_OF_DOCUMENT_TOKEN_TO_BE_REPLACED