North Sea oil and gas: the elephant in the room

Next week Extinction Rebellion will start two weeks of protest in London, demanding government action to reach zero carbon emissions by 2025; to protect biodiversity; to tell the truth about climate change; and to set up “citizens’ assemblies” to address the climate and ecological emergency.

This post by NEIL ROTHNIE is addressed to the XR “rebels” and their supporters. Neil is active in Extinction Rebellion Glasgow. He is now retired, having spent his working life on the North Sea, in the oil industry

It’s not just Westminster! The Scottish government are also complicit in a strategy that will see the UK oil and gas industry continuing to explore and produce every single drop of the 20 billion barrels of oil equivalent (bbls) thought to be recoverable from North Sea oil and gas fields.

The plan, “business as usual”, comes from big oil and has been handed down to their clients in Government. And it drives a horse and carriage through government 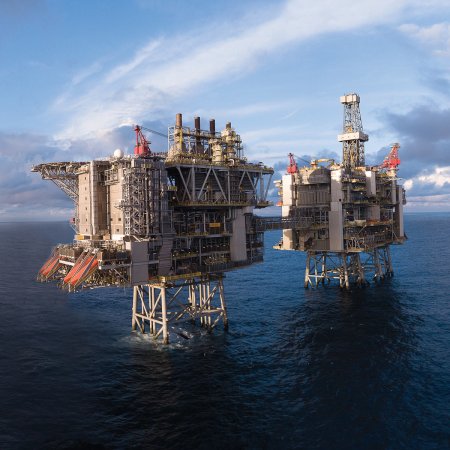 Rigs operated by BP at the Clair Ridge oil field, west of Shetland in the North Sea, which started producing in November last year. Its peak output will be 120,000 barrels of oil per day, and BP reckons it has 640 million barrels of recoverable hydrocarbons

“climate emergency” declarations, and any chance of meeting our fair share of global cuts in greenhouse gas emissions.

It also sends out a clear message to other national governments collaborating with the very same oil corporations which operate globally.

In the Gulf of Mexico, Saudi Arabia, The Canadian Arctic, Nigeria, Sakhalin Island (Russia), everywhere else – industry and Governments will feel absolutely justified to exploit their reserves to the limit, just as UK Governments intend to do.  Produce every last drop until the planet burns or the people rebel.

There must be non violent direct action aimed at big oil, and targeting oil production. There must be a Just Transition from fossil fuels to renewable energy.

That doesn’t just mean that oil workers in the global north get new jobs in a hugely expanded renewables sector.