To continue discussion on the aftermath of Labour’s election defeat, I am republishing these “thoughts on the strategy of democratic socialism” by Angry Workers of the World, a group of worker militants based in London. This article was published on Saturday on their web site here, and is part of an upcoming book reflecting on six years of working class inquiry and intervention in west London.

“Democratic socialism” is currently the main alternative vision to transforming capitalism, and as such we need to take it seriously, despite our deep disagreement with it. By democratic socialism we mean the idea that by using the two legs of the organised labour 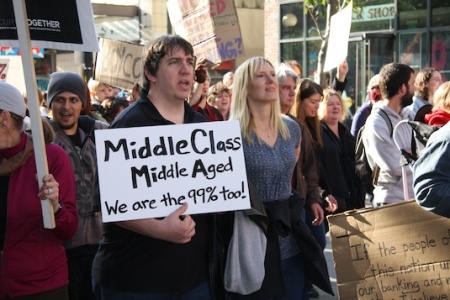 movement – the trade unions and a socialist party in government – we can walk step-by-step towards socialism. Socialism is defined as a society dominated by either nationalised or cooperative ownership of the means of production and workers’ representation when it comes to management of these economic units.

The general strategy of democratic socialism can be summarised briefly.

The idea is to campaign for an electoral victory of a socialist party based on an economic programme of partial re-nationalisation of a limited number of key industries, and the creation of a wider sector of “solidarity economy”, formed by cooperative or municipal END_OF_DOCUMENT_TOKEN_TO_BE_REPLACED

Confronting the agents of capital: a Corbynista’s dilemma

Some thoughts on the election from Liverpool Riverside. A guest post by JOHN GRAHAM DAVIES

Listening to Radio 4 on Tuesday morning was a lesson in the gloating ruthlessness of our ruling class. We had just heard a clip of Jeremy Corbyn giving a dignified, measured assessment of his, and our, calamitous loss in the election. Corbyn explained why it was necessary for him to stay on for a short transitional period.

Cut to the studio: a cackling young BBC journalist, with an accent which sounded like it came out of one our more expensive public schools, armed with the obligatory fragment of Latin. 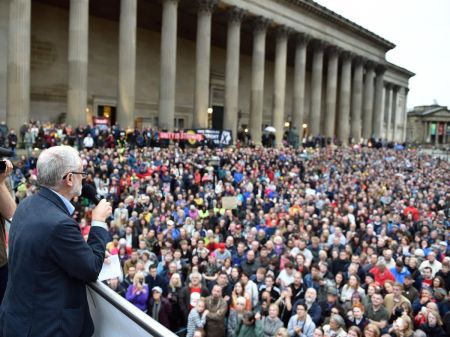 “What’s the opposite of mea culpa? Ha ha ha! Not much self-criticism there, is there? Bit of a non mea culpa if you ask me.”

This braying buffoon, like so many of the other highly paid liars at the BBC, lives in so much of a bubble that he seems unaware of how much in contempt most of the British public now hold him. Him and his beloved BBC, that pompous foghorn of the state.

A right-wing Labour member of parliament was sharing the studio and made no attempt to silence the attack, or challenge it.

We all know that the knives are out for Jeremy Corbyn, but they are also aimed at our movement as a whole, and her silence was a reminder of that.

This election result, according to those who hold the wellbeing of our class most dearly to heart – well paid journos; former Labour politicians now earning nice salaries fronting radio END_OF_DOCUMENT_TOKEN_TO_BE_REPLACED

After the election: standing up to the global rise of nationalism

A guest post by MARTIN BEVERIDGE, who was out canvassing in Bedford, and is working on a book about the history of socialist ideas in the UK

I’m still recovering from the shock of the exit polls on Thursday night. The only good news from my end was that Labour hung on to Bedford, where I was canvassing over the previous two weeks, and retained both Luton seats with comfortable majorities.

Now, taking a breath, I think it important to think objectively about where we are now,

before we can figure out what to do next.

Let’s be clear: Johnson and the Tories did not win a resounding mandate. Their vote hardly increased overall. What happened was that Labour lost, big time, and lost most in the areas that Labour badly needed to win.

What caused the slump in Labour votes?

First: in my view, Labour was totally unprepared for the kind of election this was going to be. The journalist Patrick Cockburn wrote that, instead of looking backwards to Thatcher, British politics should be understood in the context of the international rise of right-wing authoritarian governments elected on the basis of nationalism: Modi in India, Orban in Hungary, Trump in the US.

The Tories learned from 2017, and not only carried out a vast undercover social media campaign but also didn’t allow the broadcast media to be as impartial. They carefully END_OF_DOCUMENT_TOKEN_TO_BE_REPLACED

Until I saw the exit poll from the UK general election on Thursday evening, I was holding out hope that there would be a hung parliament, leading either to Boris Johnson squirming again under an opposition majority, or a Labour-led coalition or minority government.

I wasn’t the only one. The polls were narrowing, and millions of people were at least giving the impression of being undecided until the last minute.

It didn’t happen. We suffered a defeat. Here are some thoughts about it.

Clearly there were many reasons why working-class voters either voted Tory or did not turn out to vote Labour. But equally clearly, amidst the fear and desperation caused by

years of austerity policies, falling living standards and unemployment, the Tories’ vilification of outsiders (the continent of Europe, migrants, Muslims, and so on) had some resonance. Let’s not try to pretend otherwise.

“Get Brexit Done” was the latest in a series that includes not only “Take Back Control” but also Donald Trump’s “Lock Her Up” and “Build That Wall”.

Three days before the election, Johnson returned to the heart of his Brexit message, END_OF_DOCUMENT_TOKEN_TO_BE_REPLACED

Disaster evironmentalism 1: looking the future in the face

“Barring a miracle, [a global average temperature rise above pre-industrial levels of] 2 degrees C must inevitably be substantially breached.” Nothing that has happened since the 2015 Paris climate conference has “suggested any reason for doubting that judgement”.

The international climate negotiations in Katowice, Poland, in 2018, which were supposed to follow up on the Paris agreements, “can be seen as achieving no more than an elaborate seating-plan for the sun-deck of the Titanic”.

In 2020, countries are supposed to show how they have met the targets set at Paris, and set tougher targets. “But even if a radical programme of reduced emissions was started at that

One demonstration: two approaches. From the school students’ protest, 29 November, 2019

point, and one that went far beyond the Paris Agreement, it would need to achieve zero emissions by 2040 to stay within the 2 degrees C limit. […]

“Surely the most optimistic assumption we are entitled to make, based on current political agreements and actions across the world is that emissions will continue to rise after 2030, hopefully levelling off later in the century”.

I agree with all that – with the caveat that those temperatures are consistent with “carrying on as we are”, whereas I believe we have the capacity to do things differently. It is from the Introduction to a new book from the Green House think tank, Facing Up to Climate Reality.[2]

The Introduction argues (i) that “dangerous climate change is now inevitable” and (ii) that “we are going to have to live in a post-growth world”.

This is the starting point of what I call disaster environmentalism, being developed by Rupert Read (one of the Introduction’s three authors), Jem Bendell and other writers associated with Extinction Rebellion (XR).

In a book, This Civilisation is Finished, Read underlines: “there is no ‘safe’ level of warming”; that limiting warming to 2 degrees C, which is now “amost unachievable”, will mean the death of 99% of the world’s coral reefs, and probably the end of ice in the northern hemisphere. It END_OF_DOCUMENT_TOKEN_TO_BE_REPLACED

The disaster environmentalists’ hopes for the future rest not only on “deep adaptation”, but on acceptance that we need to live in a “post growth world”. Rupert Read writes:

It is crucial that we resist growthism, the very widespread drive to keep the economy ‘growing’. For (perpetual) growthism is a perpetual obstacle to collective sanity, to facing the reality of [ecological and social] limits. […] And green growthism is merely a subset of growthism.[1] […]

Society can not afford more growth, Read argues; progress towards understanding this is “glacially slow”. And so:

It still seems, tragically, far more likely that growth will end because of collapse than because of informed decision.

Yes and no, in my view. “Economic growth”, as manifested by global capitalism, is completely unsustainable. “Green growth”, or “socialist growth”, are no substitutes. Our challenge to the 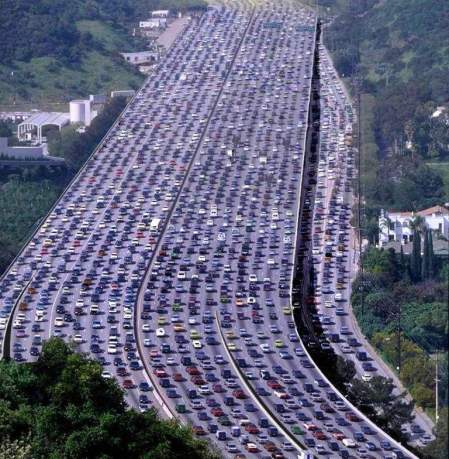 Symptom of growth: a traffic jam in the USA

economic system must open the way for a society based on human happiness and fulfilment, values completely at odds with – and distorted and defaced by – the rich-country consumerist ideology that helps to justify ever-expanding material production. But, unlike Read, I believe that the way “growth” ends is still to play for.

In my view (not new, from a socialist), all this means challenging capitalism, along with the state and political structures that protect its interests. On that, the disaster environmentalists are agnostic. They talk up the need for systemic change, but combine this with tame, almost naïve, claims about how to challenge the system.

A really thoughtful article by Richard McNeill Douglas, in a book put together by the disaster environmentalists, poses a crucial question: “Could capitalism survive the transition to a post- END_OF_DOCUMENT_TOKEN_TO_BE_REPLACED