The spectre of social unrest is haunting Putin’s Russia

On Russia’s “Black Tuesday” yesterday (16 December), the Central Bank tried to stop the ruble’s value falling by hiking interest rates. It didn’t work. The bankers and corporations panicked; the ruble kept falling. It has now lost half its value in six months. The main cause is the falling price of oil, on which the Russian economy is heavily dependent.

Now Russian people are likely to pay the price, with inflation, unemployment and falling living standards. More than at any time since president Vladimir Putin became the Moscow elite’s dominant figure 15 years ago, he is likely to face a population troubled by serious economic hardship.

Putin’s government has shown that, to deal with social unrest, it is prepared to use tools ranging from 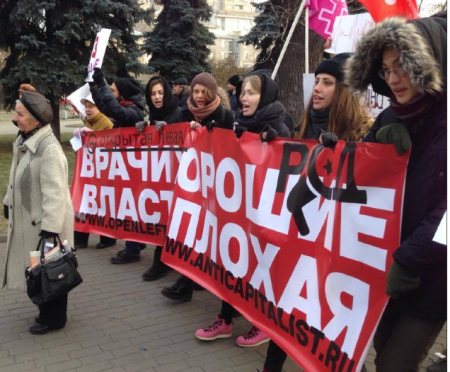 beatings and jailings (used against the Bolotnaya anti-government marches in Moscow in 2012) to incitement of military conflict that wrecks cities and divides communities (used in response to the protests and overthrow of government in Ukraine).

Here are some points that might contribute to an analysis.

Q. What are the underlying causes of Russia’s economic problem?

A. Russia has become a subordinate player in the world economy, relying overwhelmingly on the export of oil, gas and metals. During the oil boom of 2002-08, numerous plans to diversify the economy away from these export commodities were drawn up, but none were successfully implemented. So Russia emerged from the boom more dependent on these exports than ever. In 2012, the energy sector (oil, gas, coal and power) END_OF_DOCUMENT_TOKEN_TO_BE_REPLACED 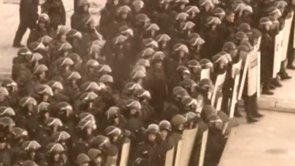 and their supporters, killing at least 16 and wounding 60 – the film Zhanaozen: the unknown tragedy (directed by Yulia Mazurova) has today been put on line.

The 30-minute documentary includes film of the police attack that the authorities wanted to hide, interviews with oil workers whose strike was ended by the massacre and scenes from the court in which activists were jailed. The film makers have asked supporters to distribute the link widely. Denis Bilunov, who worked on the film, said: “Thank you for the efforts you have made before. Since March 2013 screenings with public discussions took place in important venues: Helsinki, Berlin, Moscow, Warsaw, Kiev, Brussels, London, Geneva and Milan.”

For more on Zhanaozen and the Kazakh oil workers, see here.

Kazakh oil workers: the fight for justice goes on

The labour movement in Kazakhstan will on 16 December mark the third anniversary of the state murder of at least 17 demonstrators in 2011. The shootings, at Zhanaozen in the west of the country, put an end to a seven-month strike by several thousand oil workers.

The Zhanaozen massacre was followed by the arrest, torture and jailing of activists in 2012. The biggest strike in post-Soviet Kazakhstan’s history gave way to the harshest wave of repression.

Almost all of those jailed are now free. But trade unionists and human rights campaigners continue to 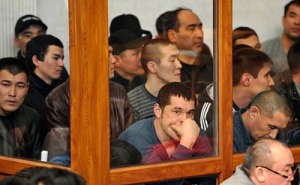 Defendants at the trial of the 37. Photo: Civic Solidarity Platform

demand justice for those murdered and tortured, an investigation of the inhuman and illegal state repression, and the reversal of fraudulent trial verdicts.

The jail sentences, of up to six years, were handed down in June 2012, at the end of a trial of 37 oil workers and others on charges arising from the clash with the police on 16 December 2011. The judge ignored lawyers’ protests that defendants had been tortured in pre-trial detention.

Roza Tuletaeva, a union activist who received one of the longest sentences, was last year transferred from prison to an open penal colony, and last month (November 2014) released early, following an international protest campaign. Two workers from Zhanaozen – Kanat Zhusipbaev and Shabdal Utkilov – are reportedly still behind bars. Three more, from the nearby settlement of Shetpe, are presumed to be in prison and are due for release this year or next.

The multiple breaches by the state forces of human rights principles and of Kazakh law are summarised in this article by ERLAN KALIEV, a human rights activist who took part in the civil society commission formed to negotiate a settlement to the strike in November 2011, was an observer at the oil workers’ trial, and has campaigned on legal issues arising from the Zhanaozen events.

After the tragedy of 16 December 2011 in Zhanaozen the general prosecutor’s office of Kazakhstan made various declarations. For example, it was stated that “the instigators of the disorder have END_OF_DOCUMENT_TOKEN_TO_BE_REPLACED