This letter from North Sea oil worker NEIL ROTHNIE, a long-standing trade union activist, was sent today to Reclaim the Power, who together with No Dash For Gas and local organisations are protesting against fracking by Cuadrilla Resources at Balcombe, West Sussex. Just as people at Balcombe are resisting the oil and gas industry’s actions, so workers on the North Sea have had to deal with it for years. There is much in common: the companies, the dangers, the need for resistance. …

I was alerted to Reclaim The Power by an old friend.  I’ve been a political and trade union activist most of my adult life (on and off).  I’ve worked all my life in the oilfields – mostly the North Sea (UK and Norway)  I’ve pretty much always been a member of a trade union, sometimes against my better judgement.

An oil platform at Cromarty

On good authority I’m assured that there is no general gas shortage and that gas prices are low at the moment.  So it was difficult for me to make sense of a report in the Financial Times, attributed to  Rob Hastings, director of energy and infrastructure at the Crown Estate, to the effect that “Britain came within six hours of running out of natural gas in March” of this year.  Why that allegation caught my eye was because it was in March this year that the Elgin gas production platform on the North Sea, operated by oil company Total, resumed production after getting the green light from the Offshore Division of the HSE.

Gas production from the Elgin Platform had been closed down for a year after one of the wells, the G4, was allowed to blow out.

Sparse as the facts in the public domain are about Elgin, some are incontrovertible.  On March 25th the previous year (2012) Total allowed gas to END_OF_DOCUMENT_TOKEN_TO_BE_REPLACED

The Luddites of Yorkshire, Lancashire and Nottinghamshire rose up 200 years ago not only against the employers who sought to cut wages and intensify 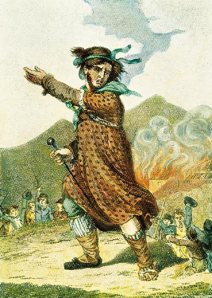 exploitation, but also against the way that those employers used machinery for that purpose. Modern-day labour and social movements could take a leaf out of their book.

Nowadays it is often assumed, even by socialists and communists, that the key to bringing about a new post-capitalist society is to change the ownership of the productive forces, i.e. to take those machines that grow, mine or make things out of the capitalists’ hands. Then, the argument often goes, people will work for themselves instead of for an employer who takes away the fruits of their labour. But what about the machines themselves?

Capitalism has developed machines not to meet human needs but to serve the purposes of its own expansion; it has tried to make science and technology serve those same purposes; and it has shaped the labour process – the things that workers do with these machines – to serve those purposes. The movement END_OF_DOCUMENT_TOKEN_TO_BE_REPLACED

History and prehistory, Science and technology, Social and labour movements |

Technology and socialism. Do they fit together THAT easily?

This is the second of two linked articles on socialism and technology. The first, about Luddism and what we might learn from it for today, is here.

Despite the experience of the Luddites, and despite the warnings by Karl Marx and other 19th century communists about how capitalism used machines to subjugate working people, 20th century labour and socialist movements have been strongly influenced – perhaps “dominated” is not too strong a word – by productivism, and by a sense that technology is on our side.

The Russian Bolsheviks, who found themselves trying to build a so-called “socialist” state in conditions of dreadful technical backwardness, saw science END_OF_DOCUMENT_TOKEN_TO_BE_REPLACED

Crisis of capital, Science and technology |

This article by STEVE DRURY continues a discussion of the origins of human culture and morality. People & Nature last month published a review by Steve of Christopher Boehm’s book Moral Origins: The Evolution of Virtue, Altruism and Shame. Chris Knight of the Radical Anthropology Group took issue with the review in an article, The Revolution That Worked. Here, Steve Drury responds to Chris Knight.

Hand print made with red ochre at the Chauvet cave, southern France, about 30,000 years ago

In his comments on my review of Christopher Boehm’s Moral Origins, Chris is concerned that I view the drift of Boehm’s argument as characteristic of sociobiology. Since I was asked to review that book and not Boehm’s life’s work, I stand by that as a sociobiological, “neo-Darwinian” perspective is what the entire book implies. Anyone can say – in another book, in this case – that they are against a scientific or philosophical tendency, but that is not something that leaps from the page when they explicitly use its methodology, as Boehm does in Moral Origins with his continual rumination about how this or that form of Darwinian selection shaped human morality.

Let’s remind ourselves: natural selection of whatever kind takes place at the level of the individual. Its outcome, the harnessing of an attribute controlled by a END_OF_DOCUMENT_TOKEN_TO_BE_REPLACED