Workers at ILVA in Taranto, Italy’s biggest steel works – which is threatened with closure under anti-pollution rules – are refusing the false choice between their jobs and their community’s health.

The government, courts, trade union leaders and the billionaire Riva family who own the works are arguing over its future. The jobs of 11,500 directly 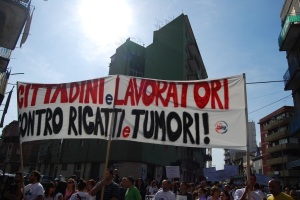 “RESIDENTS AND WORKERS – AGAINST BLACKMAIL AND TUMOURS.” (It rhymes in Italian!)

employed workers and another 9500 employed indirectly, in a region with a 30% official unemployment rate, are at stake.

But workers are not meekly following the union bosses’ campaign to keep the works open at all costs. They are rejecting the two-dimensional choice offered in the media, between keeping the plant open along with the deadly dust with which it pollutes the area, or closure and poverty.

A group of them are arguing that it is “up to the state and the Riva family to pay for the consequences of the health disaster that they have created” by investing in new, cleaner equipment. They have formed a “committee of free and thinking residents and workers”, and have organised big demonstrations demanding health AND jobs.

The initial threat to close Taranto came from a court judgement, delivered on END_OF_DOCUMENT_TOKEN_TO_BE_REPLACED