Funeral rites for the military junta

A record of a play performed by the clandestine theatre group, the Workshop of Theatrical Investigation (Taller de Investigaciones Teatrales, or TiT), in Buenos Aires in March 1981. (This is the second part of a feature. Read the first part, which tells the story of the TiT.)

The play. The TiT prepared a production of Pompas fúnebres lágrimas de sangre (Funeral Rites in Tears of Blood), an adaptation of Funeral Rites (Pompas Fúnebres), a novel by Jean Genet. It was scheduled to be performed on 25 March 1981 at the Teatro del Picadero in Buenos Aires. The director was Rúben Gallego Santillán.

Performance. The plot was suitable for the TiT as it was the story of a gay man who falls in love with a Nazi soldier, and a communist militant who is murdered by the Nazis. Its text was suggestive as it contained a conspiratorial language, a subterranean vocabulary of the street and the clandestine eroticism of prisons.

The play counted on some key spatial parameters for its development: agitation, the funeral, and the organisation of a demonstration at the end of the performance. The performance finished with the idea to incite the public to go outside and organise a demonstration in the streets, which was the classical space for popular protests before the coup in 1976. That is to say, our idea was to leave a placard outside the theatre with the slogan “Here a young person has fallen”, and in so doing to orient the public to form up behind the slogan and begin a march, reclaiming the street. We had a route, but we did not know how and where it was going to end. The demonstration was the hidden objective of the performance.

Publicity. The publicity was part of the performance. The tickets were sold well in advance, people would receive the programme with a key explanation of the play, 300 tickets were sold. We put into practice what used to be called Propaganda Agitativa (Agitational Propaganda).

A few days before members of the workshop went around the city sticking flyers on walls that said: “Here a young man has fallen” (“Aquí cayó un joven”). The original phrase in Genet’s novel was: “A young patriot fell here. Noble Parisians, leave a flower and observe a moment of silence”. The stickers went up everywhere: on the buses, tubes, walls, shops and in the main street of Buenos Aires. 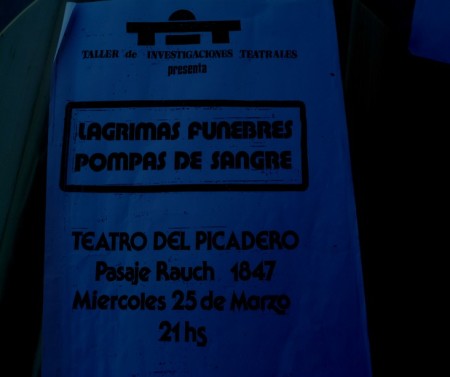 At that time political graffiti and stickers were absolutely banned. The story that these four words symbolized was a real story of the disappearance and assassination of people in the main streets of Buenos Aires, exactly in the same streets where the army were hiding their crimes. At that time, nobody knew of the existence of clandestine detention centres in key places in the city. Nearby to the theatre, in Cordoba and Florida, there was a detention centre, exactly where today there is a tourist shopping centre, Galerias Pacificos. Around the corner from the Picadero theatre was the Carlos Pellegrini school, one of the most victimised schools, in which 34 students and 2 teachers disappeared between 1976 and 1978.

Scenography. This was prepared by an architect. It started from the streets around the theatre, with dozens of crowns, and withered flowers taken from the cemetery, surrounding the theatre. The entrance of the Picadero Theatre was transformed, to depict a huge funeral. It was decorated with candles, flowers, people crying; the stairs, and the whole theatre, was a funeral. 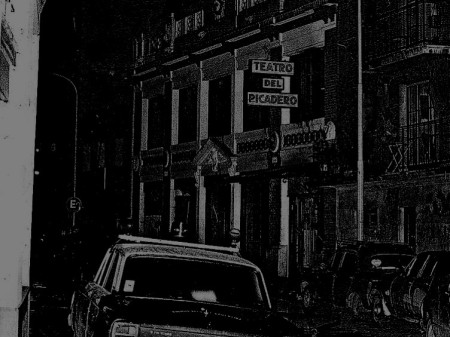 The stage was depicted as a battle ground, but with very poor materials: sand bags, celluloids, old rags, and ropes. In general, the performers were dressed in combat clothes and many of the actors were without their shirts and their trousers were ripped. The play started from the streets, and on the wall across from the Theatre someone was writing with an aerosol spray a slogan. Inside the theatre sombre music was playing, the performers were reproducing strange shadows on the wall, while someone at the door was shouting:

Ladies and Gentlemen, young people of our generation:

Come in and see!

Here you can touch the blood of your beloved!

Ladies and Gentlemen, young people of our generation,

Ladies and Gentlemen, young people of our generation,

Paying honour to the representation and to its mendacious game, we ask for a minute’s silence for the burial of the youth.

Some conclusions about the performance

■ The main tension was a real fight for the recuperation of the space and symbols.

■ The TiT wanted to create a public alert, to give visibility to, and take direct action to denounce, the assasination of young people. We wanted to announce, through theatrical representation, that the murders woudn’t be ignored or let go in silence, that, on the contrary, they will be brought into light and made visible.

■ With the slogan “Here a young man has fallen” there reappeared again what had disappeared, bodies and written political slogans.

■ The play became a political event. The performance could not go ahead, because fascists threatened to bomb the theatre. But when people came out of the theatre they demonstrated, shouting: “Se Va Acabar la Dictadura Militar” (“The Military Dictatorship is Going to Fall”). Six months later the theatre was bombed.

■ This is important from a political and theatrical point of view, because here is the crucial tension between the resistance and the state … and it continues:  the fight between the memory and oblivion. The state wanted a Final Point (Punto Final); the resistance struggled to uncover the crimes and to seek justice from those responsable.

■ From the theatrical point of view we drew a line for the future: the need for artists, cultural workers and theatre practitioners to engage and to commit, to give back presence, voice, images, symbols and bodies to the victims.

■ This kind of performance can be linked to any of the actions taken by human rights campaigners or like HIJOS (the association of the children of the disappeared). The public was alerted to the massacres.

■ The actors were symbolising the pain of absence. They were breaking the silence.

■ Theatre can give a place to the victims, a dignified funeral, where they can be mourned, so as to reclaim and revindicate their struggle.

■ The theatrical act will allow the actors to lend their bodies to the victims by making them visible, against absence and disappearance, as in this passage:

But Jean will live through me. I will lend him my body. Through me he will act and think. Through my eyes he will see the stars, the scarves of women and their breasts (…) A soul is in purgatory and I am offering it my body.