In Downing Street, the prime minister has trashed the UK public health strategy, with his repulsive defence of his senior adviser making up his own rules. Elsewhere, health workers, teachers and communities are organising to protect people from the coronavirus more effectively. Here PHIL EDWARDS, Joint Secretary of Newham Save Our NHS, writing in a personal capacity, reflects on how the virus is changing the politics of health.

The Mayor of Newham, Rokhsana Fiaz, has announced that along with the London boroughs of Camden, Barnet and Hackney, our borough will be part of a local test and track (or trace) initiative.

The government in turn announced that local areas were to submit plans for carrying out local test track initiatives across the country. The Newham initiative, on 22 May, was the result of 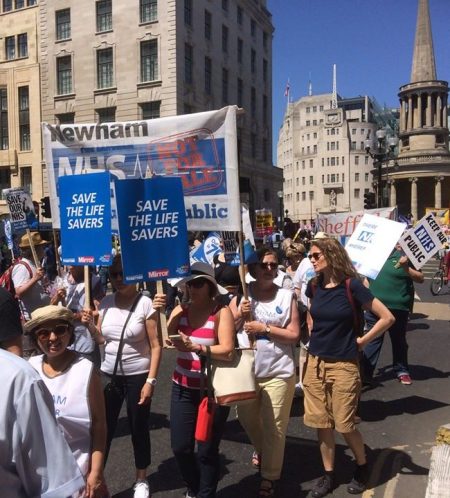 Newham Save Our NHS on a national demonstration against cuts, July 2018

weeks of pressure nationally from public health experts, local authorities, medical practitioners, and of campaigns like our own.

This came days after the release of evidence that the national test and track scheme launched by the health secretary Matt Hancock’s friends in Serco, the private contractor, and recruitment agencies sub-contracted to contact people using the government-approved mobile app, was collapsing in disarray.

As the Newham Health and Wellbeing Board met this week, to respond to questions on the local test trace scheme from local residents, it was pointed out that the government would finally launch its app this week after several false starts.

We have to approach this “victory” with some careful qualifications. It is not yet clear what the relationship is between these “local” tests and the national effort run by Serco. The scheme in Sheffield (see “Testing times” below) is run and operated by local health professionals. In END_OF_DOCUMENT_TOKEN_TO_BE_REPLACED

The hostile environment. Who needs a virus?

The shocking, disproportionate impact of the Covid-19 virus on Black, Asian and minority ethnic (BAME) communities is the outcome of discrimination, exploitation and racism that has piled up over decades.

The heightened danger to BAME communities is one of the most alarming aspects of the pandemic.

The Guardian reported earlier this month that more than three-quarters of BAME doctors feared they would contract Covid 19.

As the Tory health secretary, Matt Hancock, announced that they were “investigating” the high incidence of deaths from Covid 19 amongst the BAME community, our health campaign group

in Newham, east London, circulated a report from The Voice newspaper by Dr Winston Morgan, a toxicologist at the University of East London, on this issue.

The article was used to question ministers in parliament, to challenge the racist idea that this was somehow genetic – even though hugely different ethnic groups globally were suffering disproportionately.

In fact, the truth is that deaths amongst BAME people, whether in the local population generally or among healthcare workers specifically, is the result of historic discrimination resulting in disproportionate economic and social inequalities.

The fact is that, if you are poor, living in overcrowded accommodation, struggling to survive END_OF_DOCUMENT_TOKEN_TO_BE_REPLACED

Test, trace, isolate, support. Don’t trust the government to do any of it

Doctors and community health campaigners are working out how to start local testing and tracing projects, as building blocks of the public health strategy needed to combat Covid-19.

The local initiatives come in response to the government’s disastrous failure to organise testing and tracing, seen by public health specialists as one cause of the UK’s high rate of infections and deaths.

In Sheffield, a group of doctors including retired public health specialists, directors of public health and GPs have set up a pilot project, aimed at working out how volunteers without medical training could do contact tracing.

Covid-19, which recommend that “cases are identified, advised to isolate, and that contacts are traced, advised to quarantine, and then followed up to identify new cases”.

The organisation points out: “Contact tracing is not currently part of UK guidelines, but there is a groundswell of opinion that it should be.”

Local authority and NHS staff have contact tracing skills, but there are not enough of them, the group says. Volunteers can be recruited and trained to do contact tracing, and to support people who need to isolate: the pilot project will determine exactly how.

In Oxfordshire, the Keep Our NHS Public group published a briefing this week urging that the Sheffield initiative be “supported and replicated”.

The Oxfordshire group call for the local authorities’ public health teams, and the Directors of END_OF_DOCUMENT_TOKEN_TO_BE_REPLACED

From a ready meals factory … to social revolution

Review by BOB MYERS of Class Power on Zero-Hours, by Angry Workers of the World (387 pages, £9.00, distributed by PM Press).

Here is the opening paragraph of Class Power on Zero Hours:

In January 2014 we chose to move to a working class neighbourhood on the fringes of west London. We felt an urgent need to break out of the cosmopolitan bubble and root our politics in working class jobs and lives. We wanted to pay more than just lip service to the classic slogan, “the emancipation of the working classes must be conquered by the working classes themselves”. Over the next six years, comrades joined us and we worked in a dozen different warehouses and factories. We organised slowdowns on the shop floors, rocked up on bosses’ and landlords’ doors with our solidarity network, and banged our heads against brick walls as shop stewards in the bigger unions. We wrote up all our successes, as well as the dead-ends, in our publication, WorkersWildWest, which we gave out to 2000 local workers at warehouse gates at dawn. We tried to rebuild class power and create a small cell of a revolutionary organisation. This book documents our experiences. It is material for getting rooted. It is a call for an independent working class organisation.

I only met the authors of the book, members of a group called Angry Workers, a few weeks ago, instantly liked them – and so looked forward to it. When I read it, I found myself in a continual inner debate: “Is this right?…. no it can’t be. Wait a minute, maybe it is. …” and so on. And, having finished

Reproduced with permission from classpower.net

the book, this is still how I feel. So I can only write this review with this debate going on in my head, and look forward to developing it with the Angry Workers, and hopefully with many other people.

Through my inner debate runs a clash of political backgrounds and of generations. I became active in the labour movement as a teenager, in the 1970s, in the aftermath of the 1968 uprisings in Paris and elsewhere. The Vietnam war was in full swing. I and many other people thought revolution was around the corner.

We nearly all joined one left wing political group or another but, though we didn’t see it at the time, all these groups were really sects – almost like religious sects – that all believed they and they alone were the “revolutionary vanguard”, the organisation that would lead the masses to victory. I joined the Workers Revolutionary Party (WRP), and my whole political education was based on the idea that we (the party) were the leaders, and the masses were the followers. The WRP fell apart in 1985 when its leader (guru) Gerry Healy was outed as a serial sexual abuser of young women in the party.

It has taken me and other ex members years to think our way out of the nonsense of us as the “revolutionary vanguard”, and find our way back to the idea Marx expressed in the quote above: “the emancipation of the working classes must be conquered by the working classes themselves”.

I felt we had made progress … and then along come these young people who not only worked that out long ago, but are trying to put this outlook into action.

I hope this review will encourage other people to read Class Power on Zero-Hours, and join the debate and possible activity/organisation arising from it.

The first part of the book, the bulk of it, is very detailed reports of what followed from the Angry Workers’ decision to move to Greenford and get jobs there. This is when my first bell rang: “Is this END_OF_DOCUMENT_TOKEN_TO_BE_REPLACED