Disaster evironmentalism 1: looking the future in the face

“Barring a miracle, [a global average temperature rise above pre-industrial levels of] 2 degrees C must inevitably be substantially breached.” Nothing that has happened since the 2015 Paris climate conference has “suggested any reason for doubting that judgement”.

The international climate negotiations in Katowice, Poland, in 2018, which were supposed to follow up on the Paris agreements, “can be seen as achieving no more than an elaborate seating-plan for the sun-deck of the Titanic”.

In 2020, countries are supposed to show how they have met the targets set at Paris, and set tougher targets. “But even if a radical programme of reduced emissions was started at that

One demonstration: two approaches. From the school students’ protest, 29 November, 2019

point, and one that went far beyond the Paris Agreement, it would need to achieve zero emissions by 2040 to stay within the 2 degrees C limit. […]

“Surely the most optimistic assumption we are entitled to make, based on current political agreements and actions across the world is that emissions will continue to rise after 2030, hopefully levelling off later in the century”.

I agree with all that – with the caveat that those temperatures are consistent with “carrying on as we are”, whereas I believe we have the capacity to do things differently. It is from the Introduction to a new book from the Green House think tank, Facing Up to Climate Reality.[2]

The Introduction argues (i) that “dangerous climate change is now inevitable” and (ii) that “we are going to have to live in a post-growth world”.

This is the starting point of what I call disaster environmentalism, being developed by Rupert Read (one of the Introduction’s three authors), Jem Bendell and other writers associated with Extinction Rebellion (XR).

In a book, This Civilisation is Finished, Read underlines: “there is no ‘safe’ level of warming”; that limiting warming to 2 degrees C, which is now “amost unachievable”, will mean the death of 99% of the world’s coral reefs, and probably the end of ice in the northern hemisphere. It END_OF_DOCUMENT_TOKEN_TO_BE_REPLACED

The disaster environmentalists’ hopes for the future rest not only on “deep adaptation”, but on acceptance that we need to live in a “post growth world”. Rupert Read writes:

It is crucial that we resist growthism, the very widespread drive to keep the economy ‘growing’. For (perpetual) growthism is a perpetual obstacle to collective sanity, to facing the reality of [ecological and social] limits. […] And green growthism is merely a subset of growthism.[1] […]

Society can not afford more growth, Read argues; progress towards understanding this is “glacially slow”. And so:

It still seems, tragically, far more likely that growth will end because of collapse than because of informed decision.

Yes and no, in my view. “Economic growth”, as manifested by global capitalism, is completely unsustainable. “Green growth”, or “socialist growth”, are no substitutes. Our challenge to the

Symptom of growth: a traffic jam in the USA

economic system must open the way for a society based on human happiness and fulfilment, values completely at odds with – and distorted and defaced by – the rich-country consumerist ideology that helps to justify ever-expanding material production. But, unlike Read, I believe that the way “growth” ends is still to play for.

In my view (not new, from a socialist), all this means challenging capitalism, along with the state and political structures that protect its interests. On that, the disaster environmentalists are agnostic. They talk up the need for systemic change, but combine this with tame, almost naïve, claims about how to challenge the system.

A really thoughtful article by Richard McNeill Douglas, in a book put together by the disaster environmentalists, poses a crucial question: “Could capitalism survive the transition to a post- END_OF_DOCUMENT_TOKEN_TO_BE_REPLACED

Disaster environmentalism 3: what to do

The gap in disaster environmentalist thinking, the absence of any kind of sense of how society changes, or could be changed, explains its’ exponents political tactics, in my view.

Non-violent direct action (NVDA), which has become a hallmark of XR, is seen as a way of pushing the existing political system to change. For disaster environmentalism, it’s a last ditch attempt: if this fails, only collapse – whatever that means – awaits, and social renewal can only be achieved through “deep adaptation”.

This is underpinned by misunderstandings and half-thought-out ideas about how society changes, in my view.

The danger of co-optation

Read writes that XR wants and needs “to transform the whole existing system […] within years, not decades. Such transformation will mean that many economic interests get challenged, or indeed ended”. This “attempt to rapidly change the entire economic, social and political system” will be far more difficult than the task of previous movements; “the vested interests opposing us are vast, as are the ideologies that have to be overcome or transformed.” And what he describes as his “key point”:

Women and black people could be accommodated into the existing system; in this way the task of the Suffragettes and of the Civil Rights Movement, while hard, was doable. But what we want – need – is to transform the whole existing system, not merely to allow excluded people access to it.

This shows a breathtaking lack of understanding about how the political representatives of capitalism work to co-opt, subvert and control social movements.

To state the completely obvious, while the specific demands of the Suffragettes, for women’s right to vote, has been won, countless aspects of the repression of women have been

reproduced by capitalism in new, more sophisticated forms. Women’s legal rights to abortion is currently under threat in a series of countries.

As for the Civil Rights Movement in the USA, the gains it won in terms of voting rights for black Americans have been under vicious attack from that time to this. Gerrymandering, ID requirements, laws depriving former prisoners of the vote, and more blatant measures are used across the USA to stop black people from voting. Rights are won in struggle, defended and extended in struggle, and can be lost in struggle.

If, then, tackling climate change requires a deeper-going transformation even than these battles for the right to vote – and I agree that it does – it surely follows that the battle will be END_OF_DOCUMENT_TOKEN_TO_BE_REPLACED

“Where the fuck is the government?” ask the climate strikers

About 2000 school students marched through London today, marking the latest “Fridays for Future” strike. The demonstration was just one of a huge number internationally. You can see the giant crowds in cities across Asia, Africa and Europe at #Climatestrike or #Fridaysforfuture on twitter.

In London, “Where the fuck is the government?” was a popular slogan. Possibly because the prime minister, Boris Johnson, chickened out of the first ever televised debate between 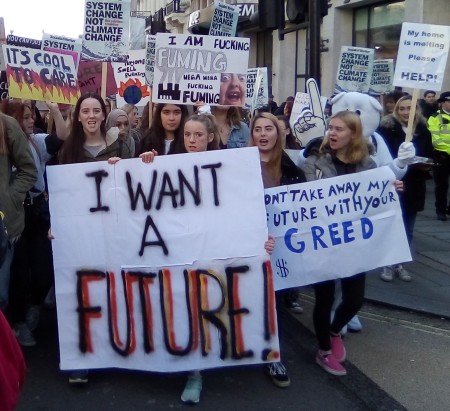 The front of the students’ march in London today

political party leaders on climate change on Wednesday – and then had his Tory party friends threaten Channel 4, who staged it, with losing its licence.

The marchers also shouted “climate justice”, “Whose streets? Our streets. Whose planet? Our END_OF_DOCUMENT_TOKEN_TO_BE_REPLACED

Climate scientists are people too

Climate scientists understand potential climate disasters, but can not accurately predict the timescales or details of how they will unfold.

Some are more sceptical than others about the Intergovernmental Panel on Climate Change (IPCC), but all see it as an essential outlet for their research.

When pushed to question some of the IPCC’s ludicrous assumptions on negative emissions technologies, some are readier than others to criticise.

These were my impressions from an all day conference in London yesterday, where scientists presented the IPCC’s three recent reports – on limiting warming to 1.5 degrees, on oceans and ice sheets, and on land and agriculture.

Earth, from space. No land is visible because that is the Pacific Ocean. Corinne Le Quere showed this photo at yesterday’s conference: a reminder that the oceans cover 70% of the earth’s surface

Speakers repeatedly urged political and social action, which they are convinced can avert the worst impacts of global warming. But there was no mention of radical social change: the appeals were, rather, for “joined-up government policy”.

The event was organised by the Royal Meteorological Society of the UK. It was free to get in and open to all. There was a deluge of useful information, clearly and thoughtfully explained. (The presentations and other relevant stuff are on its web site here.)

To be honest, I could not understand why it wasn’t over-booked, and was disappointed that there were empty seats. One scientist I talked to in a coffee break saw it differently: he had END_OF_DOCUMENT_TOKEN_TO_BE_REPLACED

Geoengineering: let’s not get it back-to-front

A response to After Geoengineering by Holly Jean Buck (London: Verso Books, 2019)

We need to talk about geoengineering. Badly. To do so, I suggest two ground rules.

First, when we imagine futures with geoengineering, whether utopian or dystopian, let’s talk about the path from the present to those futures.

Second, if society is to protect itself from dangerous global warming, it will most likely combine a whole range of different methods; there is no silver bullet. So we need to discuss geoengineering together with other actions and technologies, not in isolation.

In After Geoengineering, Holly Buck urges social movements and climate justice militants to engage with geoengineering, rather than rejecting it. She questions campaigners’ focus on

Civil society groups protesting at the UN climate talks in Lima, Peru, in 2014, when fossil fuel companies organised sessions on carbon capture and storage. Photo by Carol Linnitt from the DeSmog Blog.

Buck offers a clear, jargon-free review of technologies, from afforestation and biochar that some climate campaigners embrace, to solar radiation management, the last word in technofixes that is broadly reviled. She intersperses her narrative with fictional passages, warning of the pitfalls of “mathematical pathways or scenarios, behind which are traditions of men gaming our possible futures” (p. 48).

But one of Buck’s key arguments – that we will reach a point where society will collectively “lose hope in the capacity of current emissions-reduction measures to avert climate upheaval”, and “decide that something else must be tried” (pp. 1-2) – cuts right across both my ground rules.

Buck asks: are we at the point […] where “the counterfactual scenario is extreme climate suffering” and therefore “it is worth talking about more radical or extreme measures [than mitigation]”, such as geoengineering? “Deciding where the shift – the moment of reckoning, the desperation point – lies is a difficult task” (p. 4).

This is a false premise, in my view, for three reasons.

First: we can not, and will not for the foreseeable future, perceive this “desperation point” as a moment in time. For island nations whose territory is being submerged, for indigenous peoples in the wildfire-ravaged Amazon, for victims of hurricanes and crop failures, the point END_OF_DOCUMENT_TOKEN_TO_BE_REPLACED