Scotland: “We encourage everyone to speak, even if their voice shakes”

CATHY MILLIGAN is standing as an Independent candidate in the Glasgow City Council elections on Thursday 4 May, in the Linn ward. Here she writes about how Castlemilk Against Austerity, the community group she represents, is organising on one of the city’s largest housing schemes

I have always been politically minded, in that I think that how we live every day is dictated by politics and the powers that be. I was active politically when I was a teenager. I left school in 1979 when Thatcher came to power so there was a lot to be politically active about. But I wouldn’t say I have been active since – until the past five years.

In 2009 I lost my job due to ill health. I had to claim employment and support allowance, that really woke me up to how badly people on benefits are being treated. It’s horrible, and I am of the mind that no-one would 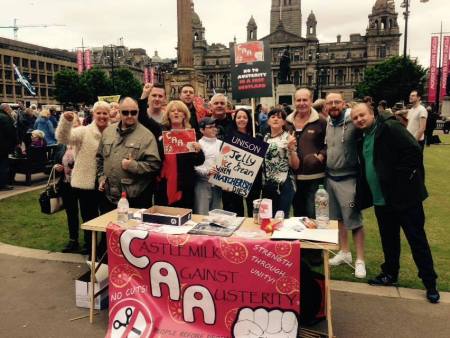 willingly put themselves through this, which is contrary to the many TV programmes portraying the opposite to be true. Life on benefits is full of misery and despair. At one point I was left to live on £47 per week, for ten months.

I was too ill to fight it, and it really pushed me to the edge. I felt scared, alone, worthless. Thankfully, family and friends pulled me through it, but it’s horrible. The truth of that is being exposed everyday … and people are dying. That’s why I, Daniel Blake is such an important film, highlighting the inhumanity of the Tories’ social security policies that create a harsh, unfair world, leaving people in despair.

The film only shows the tip of the iceberg. There are worse scenarios being played out every day. Then we get the moral tone being set, about “skivers” and “shirkers”, turning worker against worker.

When the bedroom tax was introduced, I got involved in the fight against it. Though it wasn’t directly an attack on me, I saw it as a further attempt to undermine our social security provision … but at last people were waking up to the unfairness.

Then came the referendum campaign on Scottish independence, in September 2014. At first I was for voting No. I saw it as a red herring, to distract us whilst the real politics were being enacted like the selling off of the NHS, social care provision, the tearing apart of social security, and so on. But the radical independence campaign, Hope Over Fear (leaders aside) – that was supported by all the young people I knew, including my son and, especially, my nephew – convinced me that it was indeed political. It was about undermining the unfair system, about taking back our politics, about working for a fairer, more equal place, and for people power to have a say in how things could be run.

I helped organise an event for young people to talk about the referendum with music, poetry and debate. It was brilliant. They called it a referenjam, designed a cool poster and even wrote a song. I felt so inspired by their attitudes and reinforced my belief in people to work things out for a better more equal world.

Unfortunately we didn’t get a YES vote, but we couldn’t let that energy, self belief, creativity and imagination go back inside. It had to be built on and made better. I wasn’t alone. Immediately after the referendum, we created Castlemilk Against Austerity, a non-party-political community group, where everyone is welcome and encouraged to bring their ideas and speak – even if their voice shakes – because we believe in people. It’s going to take everyone to make change.

I have never even considered standing in any election before. It has only been over the past couple of years that it has even been discussed, as we got more and more involved campaigning against the economic policies of austerity. I always said no, I wouldn’t do it. I’m not a politician and have never aspired to be one.

Last year, as a collective, we discussed the possibility of standing in the elections. After weighing up the pros and cons, we decided it was something we should do. James, a member of our group, put himself forward to stand, and we started planning our campaign. Unfortunately, due to family and work commitments, it wasn’t the right time for him to make that stand, though, like the rest of us, he believed that one of us should stand. That’s the thing: there are all sorts of obstacles in our way, just to get political representation … a voice that can tell the truth about how things are. That’s why I have decided to stand. I’ve nothing to lose, but lots to gain. We are being stripped of everything in our communities. They won’t stop, we have to stop them. It’s ridiculous, in this day and age, that people are going hungry. There are enough resources, there’s enough food. It’s so blatantly unfair, and it has to change.

I will fight tooth and nail against any cuts. I will expose every detail that I can find of the council’s financial transactions. I will fight for green energy and fight for social housing. I will fight for fairness, social justice, education and the NHS, for an end to zero-hour contracts, and an end to benefit sanctions. The list is ongoing. But I will challenge every aspect of social injustice, and demand fairness and respect for all.

I also think we have to talk about the source of all these problems: a system that exists only to make profit at the expense of human beings. We are seeing it played out every day in our communities: cuts to services like social care has had a huge impact on workers and the people they care for. People who are the most vulnerable are left isolated and uncared for. Vulnerable children are being pushed into mainstream schools with inadequate provision. Weans are going hungry. The list is endless. We have all the knowledge and resources to stop this from happening. The only reason it is happening is because those resources are unevenly shared. If we don’t address that problem, then we are just covering up all the cracks.

I am not sure if we can win a council seat at the election, but the support and encouragement we have been getting has been amazing, and we want to keep that going. We have raised just over £1000 in two weeks for the campaign so thats brilliant. We had a very successful campaign launch, on 24 March, in Castlemilk Bowling Club am hoping for a good turn out from the people in the community and we will take it from there.

Over the past three years we have achieved a lot in our community. We have supported each other through hardship; made lots of connections; created a newsletter, encouraging people to have a voice; and created music nights, encouraging community spirit and providing a platform for local musicians and poets. We have created food solidarity markets, with the motto “bring what you can, take what you need”, countering the stigma and shame of food banks. We have met loads of amazing talented people, all on our side, and there are more and more people coming on board. The young people in the community are helping us organise our next food solidarity market, and they are very clear that it’s about the community sticking up for each other … all the while reminding people that it is us who make and create things, not money.

So don’t sit back and let someone else do it. Every community should make a stand against austerity. Find your voice. We need you. Don’t leave it to party politics.

■ and This movement is learning fast, growing arms and legs (September 2014)

This entry was posted on Monday, April 3rd, 2017 at 6:50 am and is filed under Social and labour movements. You can follow any responses to this entry through the RSS 2.0 feed. You can leave a response, or trackback from your own site.