Such a drive to retrofit and electrify homes would be an alternative to a multi-billion-pound scheme, supported by oil and gas companies, to turn the gas network over to hydrogen.

That scheme, Northern Gas Networks’ H21 project, could tie up billions of pounds of

government money in risky carbon capture and storage technology, which is not proven to work at the scale required – but would help to prolong the oil and gas industry’s life by decades.

This is a test for social and labour movements all over the UK.

The demand for retrofitting and electrification should be taken up, and fossil-fuel-linked technofixes rejected. Otherwise, talk of “climate and ecological emergency” is empty words.

“Our most important and urgent action is to halt the flow of carbon dioxide into the atmosphere”, says a draft document that the Leeds TUC published last week. “This means radical changes to the way we use energy for work, travel and to heat our homes.”

In setting out a plan for Leeds, the TUC there hopes to “offer a model that will be taken up by other towns, cities and regions”, where it can form the basis for collaboration between local authorities, and a focus for trade unions and community campaigners.

The case for super-insulation and heat pumps

“There can be no realistic pathway to zero carbon which relies solely on changes in the way we produce energy”, says the TUC document. “Continuing to extract and burn carbon-based fuels in any form – with or without carbon capture – is not compatible with preventing dangerous global heating.”

What’s more, converting domestic heating and hot water to electricity from renewable sources is “viable only if demand is significantly reduced”.

And: “This need not mean that we miss out on comfort. In fact, if homes are properly adapted we can make them warmer – and cheaper to run – while using far less energy.”

Insulating homes to a high standard can reduce the energy input required by 80%. And this means lower bills.

Even now, the TUC points out, 13.5% of Leeds residents live in homes that are hard to heat due to structural features – and they are unable to pay without limiting food and other essentials.

The Leeds TUC document details how investment in retrofitting, heat pump installation and – where appropriate – district heat networks, could create tens of thousands of jobs. By the mid-2030s, such a drive could require more than 300,000 jobs.

The TUC urges “democratic ownership and control” of such a retrofit programme, “with proper representation of both workers and householders”. It calls for Labour-controlled Leeds City Council to coordinate the drive.

What’s wrong with the hydrogen project

The H21 project planned by Northern Gas Networks involves producing natural gas (i.e. methane) from the North Sea, extracting the hydrogen from it, and disposing of the carbon dioxide left over using carbon capture and storage (CCS) technology.

The H21 project “depends, in its first phase, on the production of hydrogen from natural gas by steam methane reforming, thus increasing UK reliance on imported gas, and relying 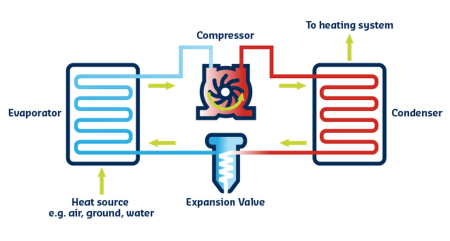 on (currently non-existent) large-scale CCS to remove the carbon dioxide produced in this process”, the Leeds TUC argues.

To produce hydrogen, this method of sucking carbon out of natural gas can be substituted by producing “green” hydrogen by electrolysing water – but, the TUC points out, this is “a distant prospect, in part because it would require a huge input of renewable-produced electricity”.

This makes it “nonsensical as an alternative to electrification of home heating (with potentially some use of ‘green’ hydrogen in industry in the longer term, and as a chemical store for surplus renewable energy)”.

This sounds like a lot, but is “trivial in comparison to the speed and scale of emissions savings needed”, the TUC argues. To confront climate change, deep retrofit of 26 million homes across England is needed, and needed fast.

This is a choice between two paths of technological development.

One guarantees new demand for natural gas, and relies on an expensive, uncertain technofix. The other guarantees near-term reductions in energy use and warmer homes, and forms part of the transition to a 100% renewables electricity system.

As Leeds TUC puts it: projects such as H21 “inevitably mean massive diversion of resources away from genuine decarbonisation”.

Such infrastructure “locks in fossil-fuel dependency for years to come – whilst simultaneously reinforcing corporate control of energy infrastructure, at the expense of democratically controlled programmes that place workers and households at the centre”.

Heating homes produces a big chunk of the UK’s carbon dioxide emissions, and decarbonisation of it has been under discussion for years. And it’s not only trades unionists who favour retrofitting and heat pumps – it’s anyone who has looked seriously at the technological alternatives. 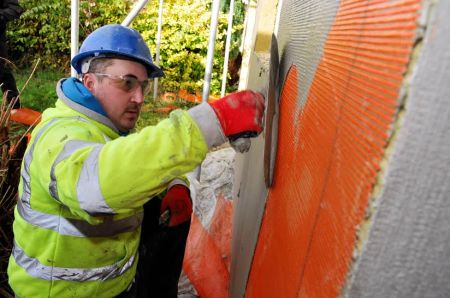 A plasterer retrofitting homes for the Sovereign Housing Association, Abingdon. Photo by http://www.TheBigCheesePhotography.co.uk

electric and hybrid pathways to taking the hydrogen route, and concluded that they “have greater potential to reduce emissions to close to zero, at reasonable cost” (see page 15 of this report).

The retrofitting and heat pumps approach is made all the more compelling, from a mainstream political point of view, by the coronavirus crisis. In July, a report by the Institute for Public Policy Research called for an “ambitious investment programme” in heat pumps as part of the coronavirus recovery package.

Even the Tory party went into the election in December promising to spend £9.2 billion on a huge household insulation programme.

Now, the government is backpedalling on this pledge – despite forking out tens of billions for the coronavirus recovery package. Environmentalists fear the oil companies’ lobbyists are responsible.

In the chancellor’s summer statement, there was only £3 billion for retrofitting homes, most of which is for a “green homes grant” scheme. This is not a strategy, but an option for homeowners – pitifully inadequate in the face of the climate emergency.

Why no money? The prime minister’s adviser, Dominic Cummings, reportedly thinks energy efficiency is “boring” – but it’s surely not just about him. The gas industry – through its lobby group, Hydrogen Strategy Now – is fighting hard for the government to support the hydrogen scheme, which they see as a potential new lease of life.

If the gas companies continue to gain political ground, the government’s commitment to keep gas boilers out of new homes after 2025 could also be in danger.

And this is not just about the UK. Similar fights have been going on around the international climate talks for years, and are going on now, around the coronavirus recovery packages, in Brussels and Berlin.

Nearer to home, we face a battle in the labour movement, too, over which technology to prioritise.

Four leaders of the largest unions had no hesitation in joining with the energy companies in support of the hydrogen scheme. (See their letter on the Hydrogen Strategy Now web site here.)

In the Labour party, the shadow business secretary Ed Miliband told a Confederation of British Industry interviewer in June that he would “like to see the government investing in carbon capture storage and broadband, among other things”. Miliband is a long-standing enthusiast for CCS.

This is not about whether hydrogen, or even CCS, might be used at some time in the future. That’s a different (albeit related) set of arguments. This is about priorities; about what to do now.

Money spent on CCS will NOT be spent on insulating homes. A plan to switch heat networks to hydrogen is a plan NOT to install heat pumps. A fake “green” approach is NOT a climate emergency approach.

Let’s take up this issue elsewhere. The experience of public health policy has taught us what waiting for a government strategy will cost. This is no less of an emergency.

■ Friends of the Earth on hydrogen

■ People and Nature on CCS and geoengineering. Plus a look at an episode from Leeds labour history

This entry was posted on Wednesday, September 2nd, 2020 at 5:20 am and is filed under Cities, Energy, Science and technology. You can follow any responses to this entry through the RSS 2.0 feed. You can leave a response, or trackback from your own site.