A military court yesterday convicted seven Russian anti-fascists of trumped-up charges in the “network” case, and sentenced them to between six and 18 years imprisonment. The trial of two more defendants continues in St Petersburg.

The frame-up of the “network” case defendants by security services (FSB) officers – and the repeated use of torture to obtain bogus confessions – has been denounced by human rights organisations. The jailed anti-fascists have been supported by an international solidarity campaign.

Here is a report from court yesterday, translated by the Russian Reader from Bumaga newspaper:

The Volga District Military Court, [sitting in Penza], has [convicted and] sentenced seven defendants in the Network Case.

Investigators claimed they were organizers of a “terrorist community.” Both men alleged that FSB officers had electrocuted them in order to obtain confessions.

Maxim Ivankin was given 13 years in a maximum-security penal colony, while Andrei Chernov was sentenced to 14 years, and Mikhail Kulkov, to 10 years. They were found guilty of involvement in a “terrorist community” and attempting to sell drugs.

Vasily Kuksov was sentenced to 9 years in a penal colony. He was accused of involvement in a “terrorist community” and illegal possession of a weapon. Another defendant, Arman Sagynbayev, received 6 years in prison.

The verdict handed down by the court in Penza suggests that the acquittal of the Petersburg defendants in the case is less likely, Viktor Cherkasov, the lawyer for Viktor Filinkov, a defendant in the Network Case, told Bumaga. “It sends a message,” said Cherkasov. “It is difficult to hope [for a positive outcome], but we are still determined to protect Filinkov’s interests.”

Cherkasov said that he planned in court to point to the faked evidence in the case. He also that he would take the case to the European Court of Human Rights if Filinkov were found guilty. The next hearing in the Network Case in Petersburg should take place between February 25 and February 28.

[In October 2017 and January 2018], antifascists and anarchists were detained in Penza and Petersburg. They were accused of organizing a “terrorist community,” allegedly called

“the Network.” Its alleged purpose was to “sway the popular masses for further destabilization of the political situation” in Russia.

The defendants in the case said investigators had tortured them as a way of forcing them to confess and weapons had been planted on their persons and property to further implicate them. [Some of] the arrested men had played airsoft together: this, investigators, said was proof they were planning terrorist attacks.

Investigators claim that the Petersburg defendants in the case, Filinkov and Yuli Boyarshinkov, acted as the group’s sapper and signalman, respectively. Their trial is scheduled to resume in late February.

At the end of the court hearing, Mediazona, the human rights defenders’ web site, reported:

The session is over. The sentence was read out in complete silence. Now, behind the court’s closed doors it is very noisy. Those who came to support the defendants are shouting: “Free political prisoners!”

“Stay strong, we are with you”, one of the support group shouted out.

“No, it’s we who are with you!” answered Dmitry Pchelintsev, one of the defendants. […]

Outside court, a crowd gathered. Some people played drums, others sang, waiting for 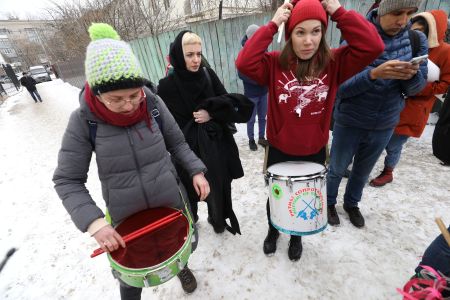 those convicted to be taken away in prison vans. Alongside stood security services officers in masks.

Vehicles left [the court] in a convoy. According to Mediazona’s correspondent, OMON [riot police] officers threw their coats over the convicts, so as to pass the crowds unseen. The supporters then began to go their separate ways.

At the end of last month, as the sentencing drew near, two of the “network” case defendants, Dmitry Pchelintsev and Maxim Ivankin, were married to their partners in remand prison. This report by 7×7 was translated by the Russian Reader:

Registry Office workers registered Dmitry Pchelintsev’s marriage to his girlfriend, Anastasia Tymchuk, in the room on the premises of Penza Correctional Facility No. 4 where the defendants are currently held. Journalists, relatives, and friends of the couple were not allowed to attend the ceremony. Tymchuk reported that the groom made her a windcatcher as a wedding gift.

to the end. We are going to seek the truth and do everything to secure [Dmitry’s] release,” Pchelintsev’s bride told journalists.

Another defendant in the case, Maxim Ivankin, registered his marriage to Anna Shalunkina at Penza Remand Prison No. 1. Ivankin had proposed to his girlfriend right in the courtroom after one of the hearings in the trial, presided over by judges from the Volga Military District Court.

“The whole procedure took two minutes,” Shalunkina said after the ceremony. “We only managed to ask each other how the other was doing. Whereas [Pchelintsev and Tymchuk] were allowed to sit next to each other and chat, here [in remand prison] there were two stools, a table, and a cage. I stood next to the table, and [Ivankin] stood in the cage. We were permitted to kiss each other only through the bars.”

Shalunkina explained that she had decided to marry Ivankin now because if he is found guilty, it is unclear where he will be taken to serve his sentence.

In August of last year, Yuli Boyarshinov, a defendant in the Petersburg portion of the Network Case, was married in remand prison. His bride wore a paper veil, and their wedding rings were fashioned from barbed wire.

■ You can support the “network” case defendants by sending them solidarity messages, donating to the support campaign, and spreading the word about the case. See the Rupression site for details

■ More on the case on People & Nature here, here and here

This entry was posted on Tuesday, February 11th, 2020 at 7:49 am and is filed under Social and labour movements. You can follow any responses to this entry through the RSS 2.0 feed. You can leave a response, or trackback from your own site.

3 Responses to Russia: “network” case anti-fascists jailed for 6 to 18 years