Syria: the revolution is alive, but buried under rubble

The Syrian revolution is “still there, but it is buried under all this rubble”, the writer Yassin al-Haj Saleh told a London audience on Tuesday.

The first layer was the first two years of the revolution (2011-13), when there was an explosion of collective community action against

Protests in Syria on the “day of rage” on 14 October

The second layer was the struggle of regional powers including Saudi Arabia, Qatar and Turkey who feared the spread of popular rebellion.

The third layer was the intervention in Syria of American and Russian forces in 2014.

The world had stood by when the Assad regime launched a chemical attack on civilians at Ghouta in 2013: after that, Syrians had felt “isolated and betrayed”, Saleh said.

Those who had participated in the revolution were “exhausted”, he continued. A quarter of the population had been displaced, many of whom were now living outside the country.

The regime was being restored, with the support of the international powers, but none of the economic and social problems that caused the 2011 uprising had been solved. Even Syrians who were not opposed to the regime wanted their lives to change for the better, and no such change is likely.

Outside Syria, Saleh said, groups of activists are working in the field of culture, and on human rights issues.

“We are still in struggle. We are not pessimists”, he said.

Saleh was speaking over skype to a meeting on Tuesday organised by the Syrian Society of students at the School of Oriental and African Studies. He is a long-standing radical political activist, a political prisoner under the Assad regime (1980-1996) and the author of The Impossible Revolution, published this year in English.

Saleh argued that the Syrian revolution faced three “monsters”: the Assad regime (“fascists in neckties”), the Salafist militia (“fascists with beards”) and the “world order” headed by the USA and Russia.

Saleh responded passionately to a question about whether any of the sides could be regarded as a “lesser evil”.

“It’s disgusting and unethical to talk about a ‘lesser evil’. It’s despicable that the great powers now base their Syrian policy on Bashar al-Assad, who has been responsible for 90% of the destruction and responsible for gassing his own people.”

These evil actors on all sides had to be confronted. The Syrian people had resisted both the regime and the Islamists, “and we were betrayed”, he said.

The four were kidnapped in December 2013 from their workplace, the Violations Documentation Centre (VDC), in the city of Douma. There has been no news of their whereabouts since.

The VDC monitors human rights violations committed by all actors in Syria. The four were all active participants in the revolution, and, before that, in struggles against the Assad regime.

Razan Zaitouneh, a human rights lawyer, defended political prisoners in Syria since 2001. She helped establish the VDC and co-founded the Local Coordination Committees (LCCs), among other organisations.

Samira Al-Khalil is a long-time political activist, and had been detained by the Syrian authorities as a result. She worked to help women 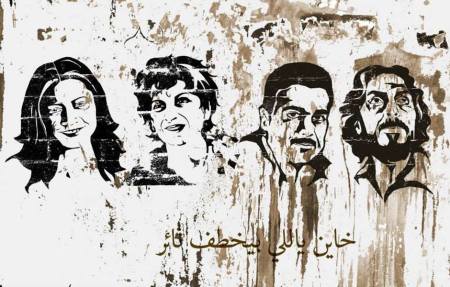 A mural in Syria supporting the Douma 4

in Douma support themselves by starting small income-generating projects.

Wa’el Hamada was an active member of the VDC and a co-founder of the LCC network.

Nazem Hammadi is a Syrian human rights lawyer and poet, who played a crucial role in providing humanitarian assistance to besieged civilians.

In his opening talk to Tuesday’s meeting, Yassin al-Haj Saleh – who is the husband of Samira Al-Khalil and a good friend of the other Douma 4 activists – spoke from a personal standpoint about the effect of forced disappearances on the victims’ families.

“Death dies – forced disappearance kills”, he said. While the effect of the loss of a loved one who has died gradually reduces over time, the suffering of the families of people who have been forcibly disappeared grows over time, he said.

Researcher Husam Al-Katlaby, the chief executive of the VDC, also addressed Tuesday’s meeting. He said that, in total, the number of victims of forced disappearance in Syria is estimated at between 75,000 and 85,000.

On Saturday at 6.0pm, London-based Syrian activists will hold a vigil for the Douma 4, and all advocates for freedom, at Trafalgar Square. GL, 7 December 2017.

Some other recent links on Syria

A letter to Rami Suleiman, a Syrian political prisoner, from Dellair Youssef

Letter of women of Idlib to the world

Here are the voices of Syria’s revolution. Let’s listen July 2017.

“Tyrants know now that they can maintain their power through mass slaughter” – interview with Leila al-Shami December 2016.

About the picture. The Day of Rage protest was held on 14 October, in areas of northern Syria outside the government’s control and across the world, to protest at the regime’s violence. A report here.

This entry was posted on Thursday, December 7th, 2017 at 8:36 am and is filed under Social and labour movements. You can follow any responses to this entry through the RSS 2.0 feed. You can leave a response, or trackback from your own site.