How the politicians who gave us the vote saw things one hundred years ago. A guest post by ANTI-WAR

One hundred years ago, the British ruling class decided to extend the vote to most women over 30, and to almost all working class men. By expanding the franchise from a minority to a majority of the adult population, they hoped to restore people’s faith in parliamentary government and thereby counter any revolutionary tendencies inspired by the Russian revolution. Sylvia Pankhurst, the feminist communist, put it this way in 1923:

The legal barriers to women’s participation in Parliament and its elections were not removed until the movement to abolish Parliament altogether had received the strong encouragement of witnessing the overthrow of Parliamentary Government in Russia and the setting up of Soviets. … The upholders of reaction … were by no means oblivious to the growth of Sovietism when they decided to popularise the old Parliamentary machine by giving to some women both votes and the right to be elected.

The extent to which the prevention of revolution was the reason Parliament introduced voting and other reforms at this time is remarkable. Here are some quotes from a century ago:

The line between order and revolution is as thin as it can be. … [The extension of the vote] stands out as the one hopeful buffer between Government by Constitutional method and revolution. Full quote here.

There may be a revolutionary feeling in the air; but the great safeguard against revolution always has been, and is now, wise constitutional reform, and it is only when … there is full and free access to Parliament for all sections and classes of the community, that the spirit of revolution can be exorcised. Full quote here.

We do not grant the vote for fitness; we grant it … for the protection of the State, in order that through the ballot box the State may learn, from the organised opinion of those who have grievances and who desire their remedy, what those grievances are. I suggest that the vote is granted nowadays on no kind of fitness, but as a substitute for riot, revolution, and the rifle. Full quote here.

What is it in the example of Russia that we should not imitate? Not the fact that she has introduced manhood and womanhood suffrage, but that she did not do it in time. “Too late” is a motto which may be found written over the victims of every revolution. We do not intend that it shall be found written over the ruins of this House. Full quote here.

You are going to increase [unemployment] benefit to 18s [18 shillings] a week. It is not enough, and we are not prepared to accept that 18s. as a settlement. We have asked for 40s. … It has been said, and may be said again, that it is encouraging those people who would rather receive doles than work. … All I can say is that, if you cannot set up machinery to deal with the malingerers, you should give us a chance and we will deal with them. … A man or woman who would abuse a privilege of that kind deserves the most severe punishment that could be meted out to them. … Unemployment produces poverty, poverty produces discontent, and discontent produces revolution. The breeding-ground for Bolshevism is poverty and destitution. … The Labour party are at the present moment, figuratively speaking, sitting on the safety valve. … To prevent disaster, to prevent disturbances, to prevent uprising, to prevent tumult, sorrow, suffering and bloodshed, any price you pay is cheap in the end. The Labour party is going on constitutional lines and will continue to do so. The Labour party is anxious to prevent any of these things occurring. Full quote here.

The evident hostility of the Labour Party to revolution – and the fact that it had actively recruited British workers to fight and die in vast numbers in World War One – convinced Sylvia Pankhurst to oppose the Party. She had also noticed that in Europe similar reformist parties were fighting “to stave off the workers’ 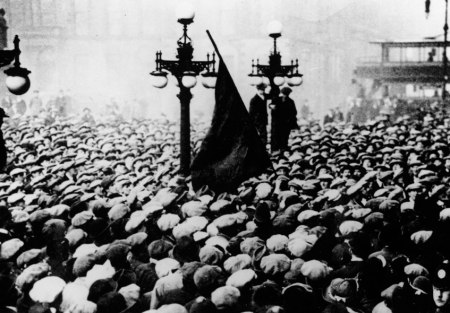 Striking workers in George Square, Glasgow, 1919. After troops clashed with rioters, a 47-hour week was agreed

revolution with as strong a determination as that displayed by the capitalists, and more effectively, because they understand the methods and tactics and something of the idealism of the working class”. Her conclusion was uncompromising.

We must not dissipate our energy in adding to the strength of the Labour Party; its rise to power is inevitable. We must concentrate on making a Communist movement that will vanquish it. (Sylvia Pankhurst writing in the Workers Dreadnought, February 1920.)

To the women, as to the men, the hope of the future lies not through Parliamentary reform, but free Communism and the soviets. (Sylvia Pankhurst writing in the Workers Dreadnought, December 1923.)

Jeremy Corbyn on Stalinism: “I am concerned at the break-up of the Soviet Union and the leadership it gave!”

Jeremy Corbyn gave a speech in 1991 at a meeting to discuss the collapse of the Soviet Union. In the speech, Corbyn does criticise the Soviet Communist Party for its elitism but he clearly has no understanding of the way the Soviet regime did all it could to sabotage any genuine revolutions. Corbyn also makes no clear references to the mass killings, secret police, militarism and economic failures that were fundamental to the Soviet system.

Despite his love for Cuba, Corbyn does not want to impose a Stalinist dictatorship in the UK. Contemporary Stalinism is more about making vacuous speeches about “socialism”, attaining office through elections and then never seriously confronting big capital. Chavez in Venezuela and Syriza in Greece are recent examples of this strategy with its inevitable demoralising outcome. 20 June 2017.

■ What would Corbyn do?

■ Jeremy Corbyn strikes a blow at Blair-ism. And now what? (September 2015)

This entry was posted on Tuesday, June 20th, 2017 at 7:18 am and is filed under History and prehistory. You can follow any responses to this entry through the RSS 2.0 feed. You can leave a response, or trackback from your own site.

2 Responses to Voting as counter revolution