Brazilians gathered last night in London, in front of their country’s embassy, to remember the musician Mestre Moa do Katendê, who was murdered this month.

The event was also a protest against authoritarianism and violence, and against attacks 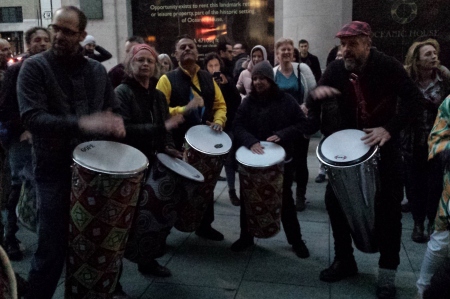 on democratic rights. “It’s a very worrying moment in Brazil”, one of the organisers told the crowd of about 200 people, during a break in the music.

Mestre Moa was reportedly killed on the night of the presidential election first round, after saying he would vote for the Workers Party. The killer, who has been arrested, was a supporter of Jair Bolsonaro – who is the front runner in the second round of the poll, being held today.

There were drums aplenty, and singing and dancing, at yesterday’s event. Leaflets were passed out about the IWW Couriers Network, which organised a strike against exploitation of couriers by Uber Eats earlier this month – and which has a large contingent of members of Brazilian origin.

The organisers of yesterday’s protest issued a public statement, which said:

Master Moa Lives – Protest against fascism in Brazil. Following the sad death of Mestre Moa do Katendê – a respected Capoeira Master, musician and cultural leader – the capoeira community in London condemns the recent violence in Brazil related to the elections. We strongly condemn the incitement to violence and hate speech that has characterised the statements by the PSL [Social Liberal Party] candidate [i.e. Bolsonaro]. We believe that these statements, including those in response to Mestre Moa’s death, mean that the current election is no longer a choice between political ideas or parties’ programmes. The choice now is between those who do not accept the rights of others, and are driven by fundamentally authoritarian and violent principles, and who does respect diversity and democratic principles. We call on all Brazilians including those in the UK to support the choice for social justice. Capoeira exists due of the efforts of our elders to fight racism, prejudice and hate. We owe it to their resistance to continue to reject those who spread what they fought against.

It is a sobering thought that, a few years ago, some people that the BRICS countries (Brazil, Russia, India, China and South Africa) could offer an alternative to the neo-liberal

policies being imposed on the world economy by the US and the European Union. If Bolsonaro takes over, all five of those countries will have right-wing authoritarian leaders who openly embrace neo-liberal economic policies (Russia, India and Brazil), or submit their populations to those policies under a fraudulently “socialist” guise (China and South Africa, sort of).

Exploiting the huge reserves of relatively cheap labour in these countries is increasingly central to the way the world economy operates. But the challenge to  political domination by the forces of capital has a long way to go. Perhaps that will be the main drama of the coming decades.

■ All the photos are from last night’s event. The poster suggests that even Mr Bean would be a better candidate to vote for than Bolsonaro. GL, 28 October 2018.

This entry was posted on Sunday, October 28th, 2018 at 8:56 am and is filed under Social and labour movements. You can follow any responses to this entry through the RSS 2.0 feed. You can leave a response, or trackback from your own site.