The Ukrainian film maker Oleg Sentsov, unjustly imprisoned in Russia, is going into the fifth week of a hunger strike, demanding the release of all Ukrainian political prisoners in Russia. ANTHONY McINTYRE, a former Irish political prisoner, explains in this interview why he supports this demand.

Gabriel Levy. What’s your view of the international campaign, taking place in the run-up to the World Cup finals, to draw attention to the Ukrainian political prisoners in Russia and to demand their release?

Anthony McIntyre. It resonates with the human rights campaigning ahead of the World Cup final in Argentina back in 1978. The military junta under Jorge Videla was engaged in serious human rights

A 1981 protest in support of the Irish Republican hunger strikers, ten of whom died

abuses and when an opportunity presents itself like the World Cup, where the media will concentrate, it has to be seized. So, I think it is the thing to do.

GL. Many of the prisoners are from Crimea, which was annexed by Russia in 2014. Some of the most well-known prisoners, including Oleg Sentsov, have been jailed on “terrorism” charges that all the international human rights organisations regard as fabricated. Another prisoner, Volodymyr Balukh, was sentenced for possessing a Ukrainian flag. Others are civil society activists from the Crimean Tatar community that has suffered discrimination since Soviet times. To what extent would you regard the prisoners as victims of imperialism?

AM. I think imperialism is a term that has been used much too liberally over the years by the Left. It now sounds like a slogan rather than something that is analytically descriptive. The prisoners are victims of an aggressive and intrusive power.

Whether that power is exercised on the grounds of pursuing markets and profit, or as part of the politics of power and security in a volatile world, is up for discussion, but its effects are catastrophic for those in Crimea.

Russia, given its geographic location and historical proximity to threatening powers, might expand outside its own borders but not necessarily for imperialist reasons as understood by Marxists. But that expansionism is necessarily unjust.

GL. There is a view widespread on the “left” that the Russian government can not be defined as imperialist, because of its anti-NATO and anti-US rhetoric. People in Ukraine, Chechnya and Syria, who have dealt with the Russian military at first hand, think otherwise. What do you think?

AM. The issue is of what drives Russian expansionism. For the victim, the difference is much like that between murder and manslaughter. Being anti-NATO and anti-USA alone do not suffice to give Russia 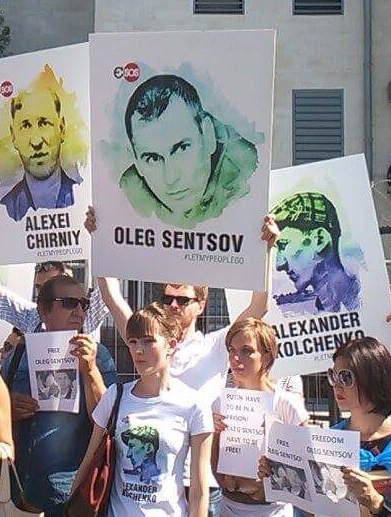 non-imperialist credentials. Inter imperialist rivalry easily explains that. But imperialism as traditionally understood might not apply to Russia.

GL. You started your political life in the Irish Republican movement and spent 18 years as a political prisoner. Do you see parallels between the injustice visited on Ireland by Britain and on Ukraine by Russia?

AM. Of course. The Russian state is a pretty brutal one. I recall the great work highlighting Russian atrocities in Chechnya carried out by Anna Politkovskaya, for which she was murdered.

AM. I agree. I fail to see how we could have supported the Irish hunger strikers in 1981 but fail to support the Ukrainians today. ■ 11 June 2018.

■ Anthony McIntyre now works as a journalist. He writes regularly at The Pensive Quill.

This entry was posted on Monday, June 11th, 2018 at 6:42 am and is filed under Social and labour movements. You can follow any responses to this entry through the RSS 2.0 feed. You can leave a response, or trackback from your own site.