A Russian trade union, facing a legal threat to its existence, will on Friday make common cause in defence of democratic rights with anti-fascist campaigners.

The interregional trade union “Workers Association”, known by its Russian acronym MPRA, has been deemed a “foreign agent” by a St Petersburg court – a legal measure requiring special registration and extensive audits, and often backed by police harassment campaigns.

The court also issued an unprecedented order to dissolve the MPRA, which was set up by car workers in 2006 and since 2013 has organised among other types of workers.

The law against “foreign agents”, passed in 2012, has been used against a wide range of non- 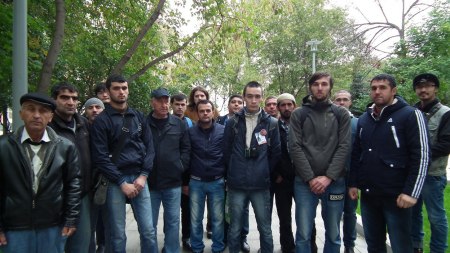 MPRA members at a lobby of parliament. See “About the photo”.

governmental organisations, from human rights campaigners and election monitoring groups to educational institutions. The ruling against the MPRA, made on 10 January, is the first against a trade union.

The MPRA reacted to the court decision by saying that it would continue its lawful organising activity.

Yesterday the union announced a campaign to defend its right to organise, and called on members to join anti-fascist demonstrations on 19 January – which are held each year on the anniversary of the murder of anti-fascist campaigners Anastasia Baburova and Stanislav Markelov. They were gunned down by fascists, in broad daylight, in central Moscow on 19 January 2009.

Update, 21 January. Friday’s demos went ahead in a large number of Russian cities: there are some great photos in this report by the Russian Socialist Movement. In Ukraine, demonstrators marking the anniversary were attacked by fascists, who were protected by the police. In London, an English translation of Markelov’s last article was published to mark the occasion.

The MPRA’s slogans for Friday are “hands off the trade unions”, and “no to the law on ‘foreign agents’ – solidarity is not a crime”. The MPRA’s statement said (in part):

The MPRA is accused because, in representing Russian workers’ interests in labour disputes with international corporations, we have cooperated with trade unions in other countries and shared our experiences with them. We are accused of gathering moral support for our comrades: long-distance lorry drivers, doctors, service sector workers.

According to this logic, only selfish interests have the right to exist. Corrupt bureaucrats, who have no idea what solidarity is, are judging us by their own standards. We are incriminated for interfering in politics, because we made attempts to amend the Labour Code in workers’ interests. It’s as if the court, by its decision, is saying to every working person in Russia: “You aren’t satisfied with your pay? You want decent working conditions? You want your rights? You’re a foreign agent!”

In the next few days, parliament will hear the first reading of a bill to provide for registration as a “foreign agent” not only of civil society organisations and media, but also individual citizens. The nationalist hysteria and spy-mania in this country has risen to absurd heights. Under the mask of patriotism is concealed the profit motives of the big – including foreign – proprietors.

The MPRA calls on all who care about the future of our country to support the anti-fascist actions held to remember the human rights campaigner Stanislav Markelov and the journalist Anastasia Baburova, on 19 January. We called on all members of the MPRA, all trade unionists and all sympathisers of the workers’ movement to join the demonstrations, to demand the repeal of the provisions of the law on NGO-foreign agents, and an end to the repression of trade unions, civil society organisations, media, and ordinary citizens. We appeal to all to support the worker members of the MPRA and demand a review of the court decision.

Trade unionists internationally are asked to send messages of support to the MPRA at  mpra.ituwa@gmail.com.

“Then They Came for the Unions …”

A comment article by IVAN OVSYANNIKOV. This English version was first published on the US web site Socialistworker.org and is reproduced with thanks to Kate S, the translator. The Russian original is here.

On 10 January, the St. Petersburg City Court issued a ruling to dissolve the Worker’s Association Interregional Trade Union (MPRA), known for its high-profile strikes at a Ford plant. This is the first time a 2012 law about non-governmental organizations acting as “foreign agents” has been applied to a workers’ organization; unions were previously untouched by it.

The MPRA, while not the largest Russian trade union – its official membership numbers approximately 4,000 – is perhaps the most renowned. It emerged in the midst of a high-profile series of strikes at the Ford plant in Vsevolozhsk [outside of St Petersburg], the most well-known of which took place in winter 2007. Bringing production to a halt and blocking the entrance to the factory, the Ford workers won the majority of their demands from the plant’s administration. Wages grew by 11 per cent, and yearly pay raises were indexed to 1 per cent above the rate of inflation. For several years afterward, the Vsevolozhsk factory’s contract, which determined working conditions and benefits, was considered a model in union circles.

The leader of the strikers, welder Alexei Etmanov, became famous overnight and, in 2011, was elected to the Leningrad Region Legislative Assembly, where he showed his worth in the opposition. In 2014, his antiwar position [against the annexation of Crimea] cost him the support of the centre-left party A Just Russia and his mandate. In 2016, he ran on the liberal Yabloko ballot line and lost.

By the end of the 2000s, the Ford factory’s example had spread: Workers at Volkswagen, AvtoVAZ, Omsktransmash, and dozens of lesser-known companies both foreign- and Russian-owned joined the ranks of the MPRA. Over the past 10 years, only a few have managed to replicate the Ford workers’ success, which was surpassed only by the workers of the Volkswagen factory in Kaluga. There, the staff of the plant was able to avoid the massive layoffs that swept through the auto industry in 2015. According to the contract that the union won, autoworkers in Kaluga would be sent not back onto the job market, but to paid vacation and training at the auto group’s European branches.

In the pre-crisis years [before the collapse of the Russian ruble in 2014], the MPRA made a name for itself through several strikes and protests. Unlike the old trade unions, which serve mostly to distribute favours, the MPRA has placed its bets on collective action, arousing the anger of the state, not to mention employers. In 2016, a Kaluga TV channel produced, Anatomy of a Union, a 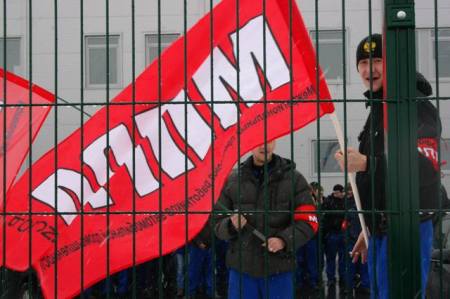 The MPRA banner on a picket line

“whistleblowing” film that accused the MPRA of ties to the West and orchestrating a “Maidan”. Further attacks followed. [Maidan, the Ukrainian word for “square”, denotes potentially insurrectionary protest action. Russian officials have used it, negatively, since the 2014 protests in Kyiv that brought down the Yanukovich government, which were held on Maidan Nezalezhnosti (Independence Square).]

Last year, on 19 May, Ilya Remeslo filed a complaint about the union with the prosecutor for the Krasnogvardeysky district of St Petersburg. Although Remeslo calls himself a lawyer and investigator, he is better known as a propagandist who specialises in criticising the opposition. The prosecutor’s office took the cue right away, beginning an audit that resulted in a lawsuit for the union’s dissolution.

“The first question the procurator’s representative asked when they visited our office was, ‘So what do unions do?’ These are completely ignorant people. But these days, the brood of snitches who use state prosecutors as a tool for their own political gain keeps growing,” declared Alexei Etmanov as he left the courtroom. The judge needed no more than five minutes in her chambers to dissolve the union.

Do You Have Any Relatives Abroad? [A question that was often asked on official forms in Soviet times]

The MPRA was charged with “egregious violations of the law and systematic actions counter to the rules”. All the items in the indictment can be sorted into three groups: formal complaints about the union’s founding documents (for example, the use of the phrase “social alliance” instead of “social organisation” in the rules), involvement in political activity disguised as union activity, and receiving funding from abroad.

Until now, Russian unions had felt themselves to be relatively safe; they were protected by International Labour Organisation conventions, which Russia has ratified, and by the federal law on trade unions, which distinguishes them from other civil society organizations.

“We all understand perfectly well that Russian trade unions are a part of the international labour movement,” says Oleg Babich, the director of the legal department of the Confederation of Labour of Russia (the KTR, of which the MPRA is a part), who represented the union in court.

In the MPRA’s case, this means the global union IndustriALL, which brings together unions of metalworkers and chemical workers in more than a hundred countries of the world. In Russia, its members even include several perfectly state-approved unions, which, according to this logic, should also now be dissolved.

The accusation of foreign financial support for the MPRA is based on its receiving one-time grants of 150,000 and 180,000 rubles ($2,500 and $3,000) over the course of two years to organise trainings and workshops. However, in Alexei Etmanov’s words, the MPRA gives IndustriALL more than 200,000 rubles ($3,300) each year, and has a right to some compensation.

“Basically all unions do some kind of back-and-forth funding”, Oleg Babich explains. “It turns out that, using these kinds of lawsuits, without any warning or other, more gentle measures, they can now destroy large organisations that unite thousands of people.”

The most unusual accusations brought by the city prosecutor against the MPRA are that it gave moral support to the 2015 protest of long-distance truck drivers, as expressed in an article titled “PLATON is no friend of ours”, and that union activists participated in a protest of fast-food workers from Carl’s Jr and a protest of doctors against cuts to hospital staff. According to the agency’s logic, the MPRA only had the right to defend the interests of its own members, but not the members of other organizations, even those with which it was affiliated.

Further “proof” of how Alexei Etmanov’s union “was actually involved in politics” was provided by the union’s online petition to change Article 134 of Russia’s labour code. These corrections were aimed at eliminating a loophole allowing private companies to not index their workers’ pay to the level of inflation.

“This court decision throws the entire existence of trade unions in Russia into doubt. It hasn’t come into legal force yet, and I sincerely hope that the Supreme Court will reconsider it”, Oleg Babich commented. Alexei Etmanov is not planning to lay down his arms, either. If the higher court leaves the decision to dissolve the union in effect, the MPRA may be resurrected under a new name.

About the main photo. These workers – members of the MPRA – demonstrated at the Russian parliament in October 2017, after a year-long campaign to try to force their employers, the building firm Gorizont and the underground railway construction company Globatek, to clear wages arrears. Before protesting at parliament they had tried and failed to get their money by appealing to the mayor, the labour inspectorate, the ministry of labour and the courts. From the MPRA web site.

More on anti-fascism in Russia and Ukraine

More on the Russian workers’ movement

■ The MPRA’s declaration (scroll down for English)

■ The truckers’ strike (from the Russian Reader, April 2017)

This entry was posted on Tuesday, January 16th, 2018 at 7:42 am and is filed under Social and labour movements. You can follow any responses to this entry through the RSS 2.0 feed. You can leave a response, or trackback from your own site.