When 15 young workers jumped or fell from the upper floors of Foxconn’s factories in China in five months of 2010 – 13 of them to their deaths – it made international headlines. People across the world felt outrage at the oppressive working conditions in which iPhones and other high-tech products are made.

Much less well-publicised were the collective resistance movements that flowered at Foxconn and other big Chinese factories in the years following the “Suicide Express”.

In April 2012, 200 Foxconn employees at Wuhan took pictures of themselves on the factory 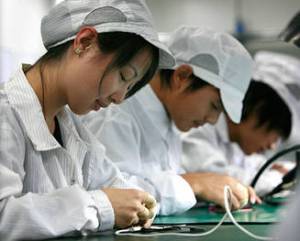 rooftop, and circulated them on social media, along with threats to jump if the company kept ignoring their demand for a wage increase. The company backed down.

Qiu describes a world – our world – in which the latest technological devices are made by workers who are subject to dehumanising super-exploitation, and are also used by those workers in organising collective resistance to their conditions.

The main focus of the book is Foxconn, the world’s largest electronics manufacturer. Its workforce of 1.4 million, mostly in China, make most i-products for Apple – including iPads, iPhones, iMacs and MacBooks – and devices for HP, Dell, Nokia, Microsoft, Sony, Cisco, Nintendo, Intel, Motorola, Samsung, Panasonic, Google, Amazon and others.

Qiu describes how, after the slew of Foxconn suicides in 2010, the Chinese state – which had always, at central and local level, supported and encouraged the company’s bosses – felt compelled to act.

The authorities sent an investigation team to Foxconn Shenzhen. Its findings, leaked to the press by a trade union official, were that Foxconn workers were being compelled to do up to 100 hours of overtime a month, while the legal maximum was 36 hours; and that the company’s “semi-militarised management system” put too much pressure on workers, both when they were at the factory and when they were off duty (p. 126).

The friction between the authorities and Terry Guo, the multi-millionaire owner of Foxconn and a Chinese media darling, was real enough – but, as I understand it, was aimed at containing and dampening worker resistance at the giant factories.

If that was the idea, it didn’t work. Foxconn workers found new ways of fighting back , and students and others in China found ways to build solidarity.

Resistance to, and with, smartphones

Qiu argues that collective resistance in the aftermath of the “Suicide Express” (that is, in 2011-14) took different forms from earlier workers’ movement in China, partly because a new generation of workers were at the fore, and partly because they deployed the latest technology.

This new generation were migrants from the countryside, who were “less united, confrontational and militant compared with their elders in state-owned enterprises and the rural villages”, Qiu writes (p. 132). “While those of older age still remember and try to continue practising Maoist politics after they are laid off or facing illegal land grabs, young workers are much more individualistic, consumeristic and prone to seductions leading toward manufactured iSlavery [i.e. work in the high-tech sector].”

There were instances of collective violence in 2012-13 – but these often took the form of “in-fights among employees of different regional and/or ethnic identities and across internal divisions of labour, rather than organised against the ruling elite or the factory itself”. Examples included riots in Foxconn Taiyuan in September 2012 (Sha’anxi guards versus Henan workers), Foxconn Zhengzhou in October 2012 (assembly line workers versus quality-control employees) and Foxconn Yantai in September 2013 (Guizhou versus Shandong workers), Qiu writes.

Against this background, the use of poetry, folk songs, music, theatrical performance and online videos had played a positive and unifying role, Qiu argues. These “alternative expressions, social networking and cultural formation” are “worker generated content (WGC)” for digital media, that is “beyond the scope of user-generated content (UGC) […] which is governed by corporate goals and/or the logic of state surveillance.”

Just as Africans used singing and dancing on slave ships and plantations in the 19th century as “spiritual and poetic, gratifying and powerful” means of defiance, so millions of Chinese workers, in an age of inexpensive digital media – especially affordable camera phones, mobile internet and social networking – have found means of “self-expression and participation in public discussion” on an unprecedented scale.

There is a parallel in the USA, Qiu argues, with the smartphone videos of police brutality, shared through social media, that initiated widespread mobilisation in 2014-15 by African Americans against state oppression.

He gives examples of mobilisation using networked technology, in addition to the collective suicide threat mentioned above, including:

■ A small-scale protest at Foxconn Shenzhen in January 2014 that “went viral via Weibo [a social networking site] among workers in different parts of China. Following each other’s Weibo accounts, they discussed overtime wages in different Foxconn facilities across the nation, the usefulness in appealing to labour unions, and ways to bring more public attention to their collective cause. All the conversations were in the public domain and easily retrievable” (p. 134).

■ A campaign led by grassroots workers and their families to protect Tongxin Experimental Elementary School in a migrant workers’ community on the outskirts of Beijing, which Qiu characterised as “collective activism with empowerment” (p. 138).

■ The use of photographs, videos and text messages to publicise high-profile cases, such as that of Zhang Tingzhen, a Foxconn worker injured on the job, or the Tiny Grass Workers Cultural Home, a community group that were forcibly evicted. Here there was “collective activism without empowerment” (p. 138).

■ Individuals who shared grievances, or demands, via social media, to great effect. An example was Zhang Jun, a worker-activist “who used high-impact videos during the Ole Wolff strike of 2009, resulting in China’s first independent workplace union born out of an industrial action.” This, Qiu writes, was “individual activism with an empowerment effect” (p. 139).

Qiu does not suggest that any medium of communication is a replacement for, or alternative to, collective discussion and action. Rather he argues that the form of action taken, collectively or individually, is changing in a country of 688 million internet users (in December 2015), of which 620 million rely on mobile access.

Digital media has been diffused among working-class communities “in the seething context of increasing social unrest”, and successive types of network used to evade and subvert repeated attempts at state censorship (p. 147).

Since 2014 Chinese workers have repeatedly deployed digital media on their picket lines; “these digital tools have been added to the toolkit of working-class struggles against iSlavery”; no economic sector has been left untouched by this use of digital media for “collective empowerment”.

Another significant initiative came from students and teachers at 20 universities in mainland China, Taiwan and Hong Kong, who set up a joint investigative team to collect and publish information on labour conditions at Foxconn and other companies. Between 2010 and 2015 they issued four major reports on Foxconn. (See the Students and Scholars Against Corporate Misbehaviour web site. Here are reports on Foxconn and other companies.)

Qiu himself participated in the 20-university team, and devotes a chapter of Goodbye iSlave to details of working conditions at Foxconn, and reflects on that experience. Qiu describes the impunity with which the company hires and fires; the illegal and inhuman methods it uses to prevent workers who want to leave of their own accord from doing so; and the bullying and violence used by management and security hierarchies.

The title of Goodbye iSlave is not just a slogan. Qiu argues that workers at Foxconn and other big Chinese manufacturers are slaves in both historical and legal senses. He starts with some telling analogies – of young women migrant workers of today, with women slaves in the past; and of the 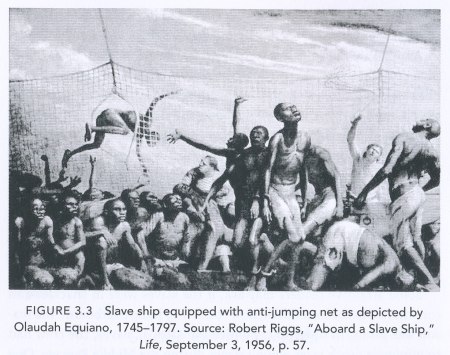 nets that 18th-century slave traders used to prevent captive Africans from jumping off their ships to their deaths in the Atlantic, with the “safety nets” installed by Foxconn after the suicides of 2010.

A central slave-like quality in the labour relations at Foxconn was, until 2010, the systematic social isolation of migrant workers. They were billeted in dormitories separate from friends and from those who travelled from the same rural 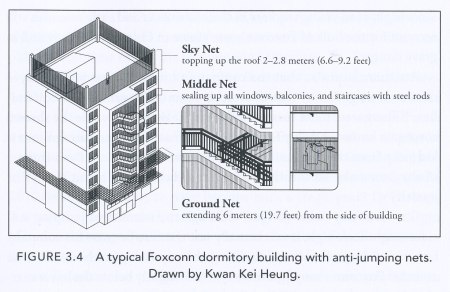 Anti-suicide nets at Foxconn (above) and on an 18th-century slave ship (top). Pictures from Goodbye iSlave

“Separation and isolation are among the most quintessential experiences of being a dehumanised slave”, Qiu argues (p. 71). “This was true for African slaves centuries ago as much as it was for Chinese workers who had to live under the dormitory labour regime of Foxconn. Although there are notable differences in the degree and methods of coercion, the origin of such atomisation was the same: essentially, these are efforts to structure a worker’s life – not just work, but life in the holistic sense, 24/7, throughout the year – for the goal of profit maximisation.”

I was convinced about the all-encompassing and dehumanising character of labour practices, but not so much by the analogy with African slaves, who were the property of their masters. Many types of “free” labour under capitalism have, through history, included aspects of slave-like comprehensive coercion and dehumanisation of the sort that Qiu mentions. There is a continuum between slavery and “free” labour; there are grey areas; there is no neat divide.

In fact Qiu quotes (p. 39) the Marxist writers Karl Heinz Roth and Marcel van der Linden, who argued that “the historical reality of capitalism has featured many hybrid and transitional forms between slavery and ‘free’ wage-labour. Moreover, slaves and wage-workers have repeatedly performed the same work in the same business enterprise.” That way of looking at it works well for me.

Qiu acknowledges the differences between types of labour (which made me still more doubtful about the usefulness of categorising Chinese electronics workers as slaves). Twenty-first century capitalism, in contrast to 18th century European capitalism, no longer relies on “brute force, intimidation and coercive measures of the law”, he writes (p. 35). Rather it uses a “hegemonic cultural regime” to stimulate market growth.

“There has to be a newfangled regime of (servile) consumption to match the marvellous regime of miraculous (slave) productivity. The goal of this new hegemonic system is to generate a new culture, even a new religion of consumerism, an indispensable pillar of capitalist world-economy.”

Yes. The creation of consumers’ “want” (or “need”) for smartphones is the other side of the coin of the coercion and exploitation used to produce the smartphones.

There is much for militants in Europe and north America to learn here. In terms of sheer scale, these events in the cradle of modern manufacturing dwarf many of the movements that we have participated in. These movements face a combination of a treadmill of capitalist production in the “workshop of the world” and ruthless Stalinist dictatorship. Many of them are first- or second-generation migrants from the countryside, in contrast to European workers, most of whom have lived for several generations in an urban world of wage labour exploitation.

In part due to language problems, accurate information about social and labour movements in China is hard to get. Jack Linchuan Qiu’s book makes a massive contribution to bridging that gap. GL, 23 October 2017.

■ A video of Jack Linchuan Qiu addressing a meeting last month in London, organised by Breaking the Frame. (I went to the meeting and bought a copy of Goodbye iSlave there. I am glad to say that all the royalties go to a campaign against exploitative labour conditions in the Democratic Republic of Congo, where coltan used in smartphones is mined, for export to China for use in factories such as Foxconn.)

■ More about technology on People & Nature: Interrogating digital capitalism … The Lucas plan and the politics of technology … I have seen the techno-future and I am not so sure it works. 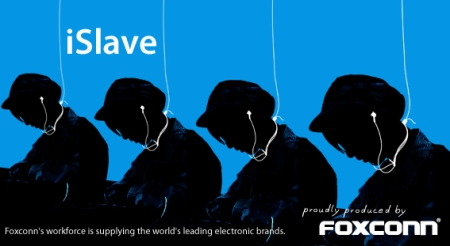 This entry was posted on Monday, October 23rd, 2017 at 7:23 am and is filed under Science and technology, Social and labour movements. You can follow any responses to this entry through the RSS 2.0 feed. You can leave a response, or trackback from your own site.

One Response to China: collective resistance against iSlavery