Trade union activists in eastern Ukraine are working with local communities to demand an end to a blockade of coal shipments organised by populist politicians and military veterans.

The blockade began last month, preventing anthracite coal from mines in the separatist-controlled areas from being moved by rail to power stations in other parts of Ukraine.

The parliamentary deputy Semen Semenchenko from the nationalist Samopomich faction, speaking for the blockaders, has said that they want a law passed that will define the separatist-controlled areas as occupied by Russia and cease trade with them. The government and the majority of parliamentarians oppose this.

In Ukraine, many people think that the blockade may reflect clashes between the country’s powerful business oligarchs. The anthracite mines, and the power stations supplied by them, are mostly owned by DTEK, an energy company controlled by Rinat Akhmetov, Ukraine’s richest man.

Disruption to the energy complex hurts Akhmetov, and may also hurt the government and president Petr Poroshenko, an oligarch in his own right.

But communities in eastern Ukraine point out that the blockade hurts them too: power cuts are in prospect, as are factory shut-downs and lay-offs. This in a country devastated by two years of military conflict and economic slump.

Pavel Lisyansky, director of the East Ukrainian Human Rights Group – who has played a role in supporting workplace organisation in the area since the military conflict began in 2014 – has spoken out against the blockade.

“This action is putting many industrial workplaces in danger of being stood down, or permanently closed”, Lisyansky said in an email. “Those in 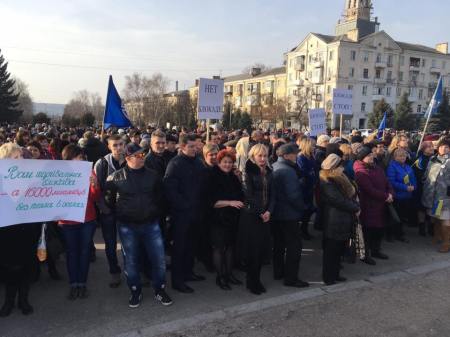 Demonstration on 6 March. The posters read “stop the blockade”

danger include the Kurdiumovskii clay pits, the Zarya chemical plant, the Nikolayevskaya heat and power plant, and the Alchevsk steel works.”

Workplace representatives formed an initiative group to seek an end to the railway blockade by peaceful means. When a press conference was held, right-wingers from the Donbass volunteer regiment turned up and made clear their opposition. A campaign of threats of physical violence against Lisyansky ensued. Nevertheless, the campaign continued.

On 6 March, people in Kramatorsk, Avdeevka and Mariupol – industrial towns a short distance from the separatist-controlled areas – demonstrated in protest at the blockade.

“The third side in this conflict, which has been completely ignored in the negotiations with the blockaders, are themselves protesting”, Lisyansky wrote on his facebook page. “If all sides in the conflict don’t sit down and negotiation, there could be tragic consequences.”

Lisyansky has also joined railway workers – who were laid off without pay for two days last month and face further lay-offs due to the blockade – in demanding to be paid for those days, as Ukrainian law requires.

“Above all, these blockaders fear the ordinary people”

The main points from an interview with Pavel Lisyansky on the Sotsialnyi Rukh (Social Movement) web site, which speaks for the Ukrainian socialist group of the same name.

Q: What are the reasons – formal reasons and real reasons – that the blockade was organised, in your opinion?

PL: This is war and repartition, defined by oligarchical clans. The blockade affects energy industry enterprises in Donbass. These enterprises are part of a particular oligarch-influenced group. The blockade is organised by veterans of the ATO [Anti Terrorist Operation, the acronym used by Ukrainian government and media to describe the military conflict], under the leadership of parliamentary deputies, i.e. politicians. From this we can conclude that the action has a political character, not a civil or human-rights one.

Formally, the blockade aims to free Ukrainian prisoners of war, and stop contraband. But, firstly, it affects the work of enterprises and the energy security of the country. Because we have very little coal left in stock. And we have already heard the prime minister’s statements that there will be rolling blackouts all over Ukraine. If such power cuts occur, people will be inclined to protest. As I understand it, the blockade is being used to put pressure on the Kyiv government.

People pay for electricity, now power cuts are starting, although everyone is paying their bills. It’s the final consumers who suffer. Enterprises will come to a standstill due to coal shortages – for example the Zarya factory or the Nikolaevskaya heat and power plant. People will get laid off from their jobs. All this will change the social and economic situation in the country. Tensions will accumulate. And in the territory outside Ukraine’s control [i.e. the separatist-controlled areas] are people who are using the message that there is a blockade, and getting together in illegal armed formations, preparing military conflict. There is a global manipulation going on.

Q: How did you put your position, including on setting up the [anti-blockade] centre?

PL: […] Before organising the centre, we went with the railway workers to the blockade, and tried to get some explanations – who [was there], how many, what was their strategy. There were no explanations, only scandals. Then some workplace collectives, and industrialists, got in touch with me and proposed that this centre be set up, and that I speak at the press conference and explain our aims. Why me? […] I defended the workplace collective at the  Amstor trading centre; when there was a strike organised by the traders at Barabashova [market], I set up a trade union organisation there. […] I organised among miners. That’s why they asked me. [With regard to the blockade,] we declared that our aim was to represent the interests of a third camp, a camp that no-one recognised. That is, the workplaces, the local people. And that it was in our interests to negotiate.

However, at the conference organised to set up the anti-blockade centre, a large number of people in balaclavas turned up, to put on pressure. […] For the representatives from workplace collectives, it was unusual to see, hear, and be involved in, that sort of stand-off. After that, residents of Nikolaevka, with the mayor or the town, went to the blockade in Lugansk

region, with a view to coming to some sort of agreement [with the organisers]. I participated in their action. But no agreement was reached. Then I did a number of broadcasts, to explain the position of ordinary people, the users of electricity and the workplace collectives – to explain why they are against the blockade, and why actions should be taken with [their] agreement.

After that I came under a wide-ranging attack. I was “connected” to the events at Bakhmut, [Donetsk], where someone photographed a bus in which people were hiding their faces. These people were denounced as titushki [opponents of Ukrainian democracy, the name given to gangs organised by the government of former president Yanukovich who attacked demonstrators at the Maidan in Kyiv], and I was their commander. Although I was in Lugansk at the time, and almost all day being interviewed on the media, and could not have been in Donetsk. Moreover, leading some sort of illegal formation is against my political position: from the start I always held discussions in the open.

The whole point of this attack was to discredit me in ordinary people’s eyes, to blacken my name. Above all, these blockaders fear not politicians, not the security forces, but ordinary people. […]

PS. Actions such as those reported above are signs of hope for working-class organisation, amid the catastrophe visited on eastern Ukraine by the military conflict. The least that socialists in western Europe could do is pay attention to these movements, and try to find ways to support them. GL, 13 March 2017.

This entry was posted on Monday, March 13th, 2017 at 7:50 am and is filed under Energy, Social and labour movements. You can follow any responses to this entry through the RSS 2.0 feed. You can leave a response, or trackback from your own site.