Afghanistan: pictures that are worth thousands of words

The photos in Guy Smallman’s book The Displaced speak for themselves, writes NADINE BALLANTYNE

A Pakistan government programme to force refugees out of Pakistan and back to Afghanistan is causing extreme hardship, as the majority have no home to return to, no family and no way to make a living. As a result the situation for internally displaced people (IDPs) in Afghanistan is deteriorating rapidly.

Things were bad enough prior to Pakistan’s action. A recent report by Amnesty International stated that the number of IDPs in Afghanistan has doubled to 1.2 million in the past three years, as increasing violence and poverty continue to push people from their homes.  According to Amnesty, “those internally displaced live in horrific conditions, on the brink of survival, with little access to food, education or health care”.

The photographer and activist, Guy Smallman, started going to Afghanistan regularly in 2008, when he first visited the Char-e-Qamba camp for IDPs in Kabul. He documents some of the children living in the camp in a beautiful and moving new book of photographs, The Displaced.

Apart from a short introduction, and captions at the end, Guy doesn’t put 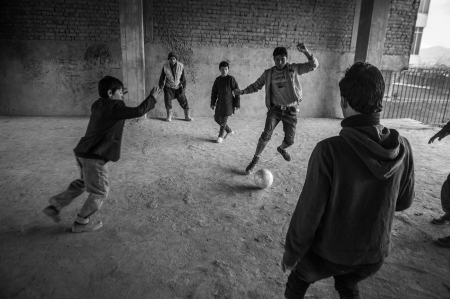 Boys at the Chamn-e-Babrak camp playing football in the car park of a semi-completed but long abandoned housing development (2014). By Guy Smallman.

words to the images. No description or opinion is needed, as they are powerful and full of the realities of the children’s lives without any need of explanation. Some of the images that really stand out are of a group of boys playing football, another flying a kite and a group of girls with books and pens.

Although many of the images are distressing and clearly show the hardship and destruction of the world around the children, they also reveal their resilience and their ability to find some space to just be children.

The children look directly into the camera in many of the pictures, showing their vulnerability, despair and strength. This makes it difficult for the observer to avoid their gaze and in turn the reality of their lives.

Over the past eight years I have worked with many young people from Afghanistan living alone in London. Their stories of suffering and bravery – in Afghanistan, on their journeys to the Europe and then the realities of living in the UK – have always filled me with admiration for their courage and determination to keep going and build a new life.

The pictures in this book make me think of those young people – what their lives could have been, as well as the thousands that have been forcibly returned to Kabul with no-one and nothing to go back to.

The final picture in the book is of a father looking at the body of his daughter, who froze to death in the camp. This is the reality of the lives of people living in the camp, without sentimentality. The power of that final image stays with you.

Photo from The Displaced reproduced with permission.

■ Copies of The Displaced available for £10 + postage from Guy Smallman

■ More on Pakistan’s plan to deport refugees back to Afghanistan, the UN’s complicity in it, and the EU deal to deport Afghan refugees.

This entry was posted on Tuesday, December 13th, 2016 at 8:27 am and is filed under Social and labour movements. You can follow any responses to this entry through the RSS 2.0 feed. You can leave a response, or trackback from your own site.