A challenge to laws that shackle trade unions in Kazakhstan was mounted at the International Labour Conference this month – and activists hope this will boost workers’ efforts to rebuild grass-roots organisation.

The conference, staged by the International Labour Organisation (ILO), a United Nations agency, 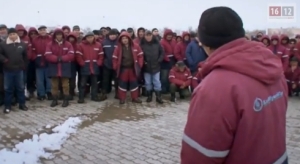 During the strike of 2011. Photo: Zhanaozen1216.wordpress.com

in Geneva, said Kazakhstan would have to amend the Trade Union Law it passed last year – or face action for breaching its obligations under international treaties.

The conference said that “excessive limitations” on unions, that “limit the right of workers to form and join trade unions of their own choosing”, had to be removed, and laws banning financial assistance to unions from trade unionists in other countries scrapped.

The decision came just after the Kazakh authorities refused registration to the Confederation of Free Trade Unions of Kazakhstan, an alternative to the state-run federation of “yellow” (government- and employer-controlled) unions.

Kazakhstan’s Trade Union Law was introduced on the back of the violent repression of oil workers, whose seven-month strike in 2011 – the country’s biggest ever – ended with a police massacre of demonstrators at Zhanaozen. At least 16 were killed and 60 wounded, and an unknown number tortured in police detention.

In 2012, 32 oil workers were put on trial, and some sentenced to imprisonment of up to six years. A wave of repression against journalists, opposition politicians and community activists produced the toughest conditions for social movements in post-Soviet Kazakhstan’s history.

As for those responsible for the Zhanaozen massacre and tortures, some low-level police officers were disciplined for their part in it, but calls for an inquiry into who ordered and organised the repression have been ignored.

The case against Kazakhstan’s anti-union laws was made to the International Labour Conference’s Committee on the Application of Standards by delegates from the International Trade Union Confederation (ITUC).[1] They argued that:

■ The requirement in the Law on Trade Unions that unions be registered, and local and regional unions be affiliated to a national confederation, “could seriously restrict freedom of association”.

■ A provision banning strikes by workers doing “dangerous industrial activities” – which is left vague in the law – “severely restricted” the right to strike.

■ The law forbids unions from receiving assistance from international organisations, in direct contravention of the International Labour Convention to which Kazakhstan has signed up.

■ Kazakhstan’s new Penal Code makes matters worse. It deems receipt of foreign funding, and proposals for illegal strikes, to be criminal acts, and makes leaders of public associations, including unions, criminally liable for various breaches of the law. The “arbitrariness” of these provisions “inevitably evoked the Zhanaozen tragedy of 2011 and the resultant plight of strikers who had been sentenced to several years in prison or in a penal colony”.

The Kazakh government infuriated the other diplomats and officials by not turning up to the session, and the Kazakh workers’ movement was not represented. (The “workers’” representative from Kazakhstan was Kerim Pirimkululy of the chemical workers’ “union”, a “yellow” pro-state organisation.)

Trade union officials from other countries weighed in against the government. Anna Wolanska of Solidarnosc, Poland, said the Kazakh government had “completely ignored” proposals from ILO bureaucrats to bring the trade union law into line with international treaties. Amanda Fisher of the US steelworkers’ union said that the refusal to register the Confederation of Free Trade Unions of Kazakhstan, on 25 May, showed that the government was becoming “more restrictive”.

Kazakhstan will now be monitored continuously by the ILO, after the conference put a special paragraph in its resolution on the issue.

Does criticism of the Kazakh government in a UN body make much difference to activists on the ground? “It reminded the workers of Kazakhstan that they have international support”, said a Russian trade union activist I asked about this.

“For us, it’s an important decision. Kazakhstan will be constantly monitored by the ILO. The restriction of workers’ rights is now on the agenda, in the UN system. The government will be forced to explain to the whole world why the situation for trade unions in Kazakhstan is so terrible.”

In Zhanaozen, they can not forget

The impact of the Zhanaozen massacre, and of the torture of activists in policy custody, is still being felt

by oil workers and their families. Journalists who have visited the town, in a remote area of western Kazakhstan, recently reported that:

■ Worker activist Maksat Dosmagambetov, who was jailed in the 2012 trial and released early in December 2014, returned from South Korea in May after being treated for a tumour on his face. He believes the growth was caused by torture that he suffered in pre-trial detention, complaints about which were dismissed by the trial judge. Dosmagambetov’s fellow workers at Ozenmunaigaz, an oil production company, collected money to contribute to the cost of his treatment.[2]

■ Zhanbolat Zhamankaraev, who was shown in a video clip on 16 December 2011 being repeatedly beaten by police with a truncheon, told journalists that he has had eight operations in the last three years. He has received no support for his psychological trauma. The 23-year-old said he wants to work and start a family, but has been unable to, due to his injuries.

■ Estai Satybaldiev, who was shot in the left shoulder by police on 16 December 2011, told journalists he 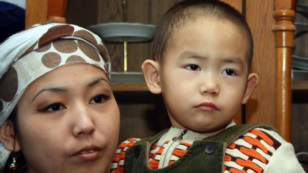 has had several operations. After being declared an invalid as a result of his injuries, he has been refused work on the railways, where he worked prior to the shooting.[3]

■ On 13 December last year Asem Kenzhebaeva, who had been detained and beaten on 16 December 2011 when she went to the police station to find her father, died at the age of 24. Asem’s father Bazarbai Kenzhebaev was detained on 16 December and brutally tortured in custody; he died on 21 December 2011. Asem pursued a case against the police, as a result of which one officer, Zhenisbek Temirov, was jailed. (He was recently released.) Asem herself was also beaten on 16 December 2011 at the police station, and in February 2012 told journalists that her kidneys had not healed – but that she had to continue working as, after her father’s death, she was the family’s breadwinner. It is not known whether the illness that led to her tragic, premature death last year was related to this.[4] GL. 21 June 2015.

[1] The ILO is based on the tripartite principle, i.e. governments, employers’ associations and trade unions are equally represented. It is an agency of the United Nations and its activity is largely based on international treaties on industry and labour. The Committee on the Application of Standards oversees the implementation of countries’ obligations, and its meetings are an opportunity for trade unions to challenge governments and employers in an international forum. The minutes of this year’s meeting where Kazakhstan was discussed can be downloaded here.

This entry was posted on Sunday, June 21st, 2015 at 5:46 pm and is filed under Energy, Social and labour movements. You can follow any responses to this entry through the RSS 2.0 feed. You can leave a response, or trackback from your own site.