Trade unions representing mineworkers caught in the crossfire of Ukraine’s ruinous military conflict have appealed for support – and received it – from the National Union of Mineworkers in the UK.

Fighting has intensified in Donetsk this week – a grim reminder of why solidarity matters.

The NUM, which is calling for peaceful resolution of the conflict and for “all interference from outside Ukraine to stop”, welcomed a 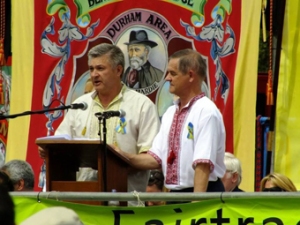 Sergei Yunak speaking at the Durham miners gala in July 2014

The delegates, from the Dnepropetrovsk branch of the Ukraine Coal Industry Trade Union (PRUP), “asked us to help put their point of view across internationally”, Chris Kitchen, NUM national secretary, said.

“Most of their members are employed by DTEK [an energy company controlled by Rinat Akhmetov, Ukraine’s richest man and the foremost oligarch in Donetsk]. They wanted to know about our experience of dealing with

privatised pits.” Kitchen sees the links, built up during exchange visits since 2010, as the best way of building practical cooperation.

During his visit to Durham, Sergei Yunak, chairman of PRUP Dnepropetrovsk, denounced Russian support of the eastern Ukrainian separatists. The conflict is “an open war on the side of Russia […] supported by local oligarchs […] and friends of [former president Viktor] Yanukovich’s family”, he said in an interview.

PRUP is one of two unions with substantial membership in Ukraine’s pits. Leaders of the other one, the Independent Mineworkers’ Union of Ukraine (NPGU), have condemned Russia’s involvement in the conflict in equally forthright terms. Nikolai Volynko, president of the NGPU Donbass, said in a recent statement that the conflict had been “provoked by the leaders of a neighbouring state”.

Tragically, the war has divided mining communities. Some Donbass miners have joined volunteer battalions on the Ukrainian side, while others had joined the forces of the self-proclaimed “people’s republics” of Donetsk and Lugansk, Volynko said.

In May last year, as the separatists’ military campaign started, Russian TV highlighted a demonstration of support for it by about 1000 miners. Volynko said much of this sentiment has ebbed. “Whereas people said previously, OK, we’ll wait and see, now, when they have waited and seen how the separatists operate, they want to finish with this as quickly as possible.”

Nine tenths of Ukraine’s 300,000 coal miners work in Donetsk and Lugansk, where fighting continues despite the ceasefire agreed between Ukraine and the separatist leaders in September. Some pits (80 out of 150, according to NPGU estimates) have been closed by shelling and flooding, and production at others has been severely disrupted.

In October, coal production in Donetsk was just 1.1 million tonnes, two-thirds lower than it had been in October 2013. Nationally, 2014 production was expected to be about 20 million tonnes (or one quarter) down on last year. That, together with the long-running dispute over Russian gas imports, has produced energy shortages.

One of Ukraine’s largest mines, the 4 million tonnes per year Komsomolets Donbassa, owned by DTEK, stopped producing coal in June due to heavy fighting nearby. Artillery fire has led to electricity being cut off and safety staff being trapped underground, and on 14 November to one death and two injuries.

Electricity shutdowns, which switch off mine pumping systems, have led to several pits (Poltava, Uglegorsk, Progress and Iuzhnodonbasskoe, according to reports) being flooded. Throughout October and November, NPGU president Mikhail Volynets warned repeatedly that a shortage of rail wagons, that were trapped behind separatist lines, meant that even pits that were still producing coal could not deliver it – and were not getting paid for it. That led to wages payments being suspended.

Serious problems with wages payments in the separatist-controlled areas have been reported by both miners’ unions. In September, miners from the Komsomolskaya pit at Antratsit in Lugansk – who had been laid off on a sharply-reduced payment of 1200 hryvna (about $100) per month – joined other local people whose pensions and welfare benefits had been cut or delayed.

Separatist military commanders responded to this “revolt for cash”, as it was called locally, by distributing some food aid – but also threatening “if you demonstrate here again, we will shoot you all”, according to a local newspaper report.

In November things for mining communities in the separatist-controlled areas took a turn for the worse, when the right wing Kyiv government decided to cut off the payment of pensions and social benefits to recipients there. The Kyiv-based trade union federation urged prime minister Arseniy Yatseniuk to reverse the decision.

Another controversial issue in Kyiv is whether Ukraine should buy coal from separatist-controlled mines to ease the energy crisis. NPGU leader Volynets says it should.

Efforts to build solidarity from the UK rest on firm foundations. Durham miners first travelled to the Donbass in 1990, in the dying days of the Soviet Union. Delegations from the NUM North East Area, inspired by the 1989 Union-wide pit strike (the first big national industrial action since the 1920s) headed out to Pavlograd.

Links were forged with the NGPU, which was born from a split with the old “official” Soviet miners’ union that opposed the 1989 strike. (I remember how Durham miners returned from Donetsk shocked at the appalling mine safety standards in the “workers’ state”.)

Those contacts didn’t survive the stormy 1990s, but links were renewed in 2007 by South Wales NUM officials.

As well as the NUM, the London-based Ukraine Solidarity campaign, working with socialist activists in Kyiv, last year linked with miners’ union activists in Kriviy Rih, a big coal-and-steel town to the west of the conflict zone.

Building practical solidarity internationally is never easy. But the NUM’s efforts compare favourably with those of the mis-named “anti-fascist solidarity” group that seeks British trade union support for the separatists.

This false “anti fascism” is an obstacle to real solidarity for four types of reasons:

■ The independent miners’ union is mourning the death of Ivan Reznichenko, head of its branch at Artemsol in Donetsk. The union announced that Reznichenko’s body was found in a shallow grave at Soledar in Donetsk on 14 January. Reznichenko disappeared on 21 June last year. He was a supporter of Ukrainian unity and a political activist in Batkyvshchina, the right wing populist Ukrainian political party (headed by Yulia Timoshenko). Police investigating the killing have said that his killers may have been linked to separatist forces. 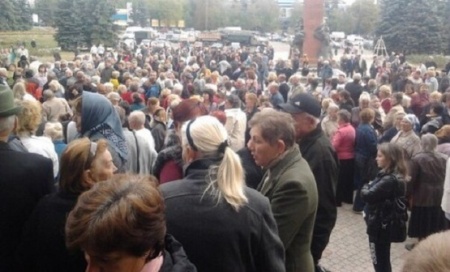 The “revolt for cash” in the mining community of Antratsit, Lugansk

This entry was posted on Tuesday, January 20th, 2015 at 7:55 am and is filed under Energy, Social and labour movements. You can follow any responses to this entry through the RSS 2.0 feed. You can leave a response, or trackback from your own site.

One Response to NUM solidarity with besieged Ukrainian miners