Global warming: Pacific trends may explain hiatus, but the big picture has not changed

A study published by climate scientists last week argues that a slowdown in global warming over the last 15 years may be due to multi-year temperature cycles in the Pacific Ocean.

That means that – while some heat has been stored in the Pacific short-term – the long-term warming effect of greenhouse gas emissions continues.

The research, based on modelling at the Scripps Institution of Oceanography in the USA, was published in Nature. (There’s a good report on the Nature web site here, although the original article is behind a pay wall.)

Climate modeller Shang-Ping Xie, who led the study, said that it shows that cooling in the equatorial Pacific “turns out to be strong enough to offset the general rise in temperature induced by anthropogenic greenhouse gases”. The model also helps to explain regional trends – such as the continued melting of Arctic sea ice, and record-breaking heat waves in the USA last year, Russia in 2010 and Europe in 2003 – that seem to be at odds with the slowdown in the rise in global average temperature.

Xie said that the study was undertaken to try to reconcile global and regional trends, and that: “The wake-up call is going to come some day, when the Pacific Ocean decides to swing into a warmer state.”

The study by Xie and his colleague Yu Kosaka focused on the Pacific Decadal Oscillation (PDO), a multi-year weather effect that warmed the Pacific in the 1970s and 1980s, but has been cooling it since 1999. The PDO is a longer-term trend that works alongside the El Nino-Southern Oscillation (ENSO), that causes alternate warming and cooling over shorter time scales. LINKS

Xie and Kosaka wrote: “We present a novel method of uncovering mechanisms for global temperature change by prescribing, in addition to radiative forcing, the observed history of sea surface temperature over the central to eastern tropical Pacific in a climate model.”

The recent slowdown in the rate at which global average temperature rises is shown in the graph. It has led to some speculation that the link between carbon dioxide concentrations in the atmosphere and global warming is not as strong as 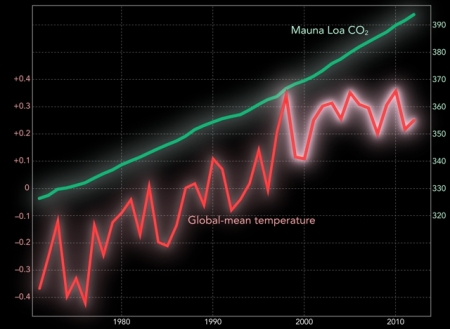 Green line: carbon dioxide in the atmosphere, as measured at the Mauna Loa Observatory, Hawaii (parts per million, right scale). Red line: the global mean temperature, measured as the deviation from the 1980-1999 average, with the hiatus highlighted (degrees, left-hand scale). From Scripps Institution of Oceanography site.

has been assumed – although carbon dioxide’s heat-trapping properties have been known for more than a century.

But the vast majority of climate scientists believe that some extraneous, relatively short-term factor must be at work. Possible causes researchers have been investigating include a prolonged minimum in solar activity, or a decline in the amount of heat-trapping water vapour in the stratosphere, as well as Pacific Ocean cooling. (A thorough summary of all this research is on the Skeptical Science site, here.)

Other climate scientists have welcomed Xie’s study. Andrew Dessler, a climatologist at Texas A&M University, said that it shows that what appears to be a pause in global warming is driven mostly by ocean variability. “If this turns out to be correct, then it seems very likely that the energy being trapped by greenhouse gases is indeed going into the deep ocean.”

Richard Allan from the University of Reading, interviewed by the BBC, said that the study “adds further evidence that the recent slowdown in the rate of global warming at the Earth’s surface is explained by natural fluctuations in the ocean, and is therefore likely to be a temporary respite from warming in response to rising concentrations of greenhouse gases”.

Climate science deniers have pointed to the slowdown in global average temperatures and claimed that it throws doubt on the link between society’s greenhouse gas emissions and global warming. (I myself faced an abusive torrent from these so-called “sceptics”, about which I wrote here.)

The overwhelming majority of climate scientists consider that, while the cause of the hiatus in average temperature rise is not yet certain, it is very likely to be a temporary effect. It does not change the long-term reality of global warming. (See for example stories on this site here and here.) GL.

More from the Scripps Institution of Oceanography here.

Photo at top: sunset over the Pacific Ocean at Acapulco. (Arturo Mann)

This entry was posted on Tuesday, September 3rd, 2013 at 7:16 am and is filed under Global warming. You can follow any responses to this entry through the RSS 2.0 feed. You can leave a response, or trackback from your own site.