Agrarian change, but not as we know it

The great upheaval in the way that hundreds of millions of labouring people in rural India live and work is not following the classic “village to factory” path, and old assumptions about that process need to be rethought. That is the point I took from a lucid and informative article, Resurrecting Scholarship on Agrarian Transformations,  by Alpa Shah and Barbara Harriss-White. It was published in Economic & Political Weekly, a great place for getting a sense of what India’s left-wing economists, sociologists, environmentalists and the rest are discussing.

Shah and Harriss-White, summarising the conclusions of some recent academic seminars on agrarian transformation, say that the structure of agrarian property in India has been transformed: old “semi-feudal” arrangements are being superceded, but not mainly by land centralisation. Tenancy and sharecropping are in decline. Small-scale cultivation persists: hundreds of millions of people retain tiny plots, many too small for their owners to subsist on what they produce there. (The average income for farmers operating less than four hectares of land is negative; somewhat fewer than 95% own less than three hectares; 63% own less than one hectare.)

A second key conclusion from recent research is that “the classic push away from agricultural work at home, in which the farmer or farm labourer moves away from the village to become a factory hand in the city, is not the dominant process of labour transformation”. Instead of moving from the land, these farmers retain their less-than-subsistence holdings, and combine work on those with unregulated, informal and unorganised employment – more likely in construction, workshop manufacturing, big capitalist farms in other regions, or service industries, than in industry. “Petty commodity production” – hunting, fishing, pottery, carpentry, construction, small shop- or stall-keeping, from home – is spreading.

There are wide varieties across the country, but between 50 and 100 million Indians have become “circular migrants”, leaving the villages to work for some months each year, but then returning. “Adivasis and dalits from Jharkhand, Orissa and Chhattisgarh, for instance, will commonly go to work as wage labour for six months to the brick factories of Bengal, Uttar Pradesh and Bihar, the agricultural plains of Punjab and Haryana, and more recently to the construction companies and mills of Tamil Nadu and Kerala, but will come back to their home villages for the rainy season where many will have small plots of land to cultivate rice that may last them a few months”, Shah and Harriss-White write.

The article relates the new research on India to a long-standing discussion among left-wing scholars about what could be called the transformation of agrarian transformations. They mention Henry Bernstein’s argument that the relationship between developing capitalist economies and global capital means that they can generate surpluses for industrial growth independently of the development of agriculture – putting into question the essence of the “agrarian question” pondered by socialists inside and outside of universities. 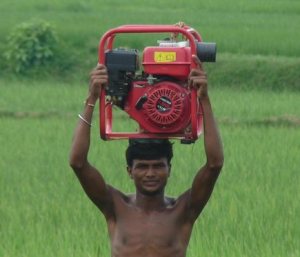 The agrarian transformation in India is absolutely relevant to discussion of the people-nature relationship. It is that transformation – in India, China and other parts of the global south – that is shaping the working class and other oppressed classes in the 21st century. Socialism, in my view, assumes that these are the forces of change … and so we should think about how these forces of change are themselves changing. Or rather, we urban inhabitants of the global north should pay more attention to what our fellow socialists in India and elsewhere are dealing with. (In my notes on People and Nature: working out a socialist approach (see towards the end of section 3), I mentioned this issue, together with the the way that Wildcat, the communist journal, argued here that the changes taking place make outdated the whole idea of an “alliance of workers and peasants” that socialists have spent so much time thinking about.)

The agrarian transformation is also relevant to the people-nature relationship because it is a transformation of the way in which tens, or hundreds, of millions of people undertake labour – the process by which, under capitalism, we humans take what we need or want from nature. If we are going to talk about, for example, the sustainable use of freshwater resources and the way in which these resources are being put under strain, India is one place to start. The farming methods developed during and since the “green revolution” of the 1970s have put great strain on water resources; the problem has been exacerbated by the availability of relatively cheap pumps, and of electricity to power them, has led farmers to tap water resources deep underground.[1] The context in which people confront these “environmental” problems is one of contemporary capitalism, in which the labour process in villages – including the way that people grow food and use water resources – is in large part shaped by the globalised capitalist market. To talk about water resources in India is to talk about social relations, and vice versa – and, as far as I know, there is a discussion going on in India about how those issues relate to each other. We urban inhabitants of the north, living in a quite different corner of that world capitalist economy, surely have much to learn from that. GL.

This entry was posted on Sunday, October 2nd, 2011 at 8:56 pm and is filed under Agriculture and agrarian change, Social and labour movements. You can follow any responses to this entry through the RSS 2.0 feed. You can leave a response, or trackback from your own site.